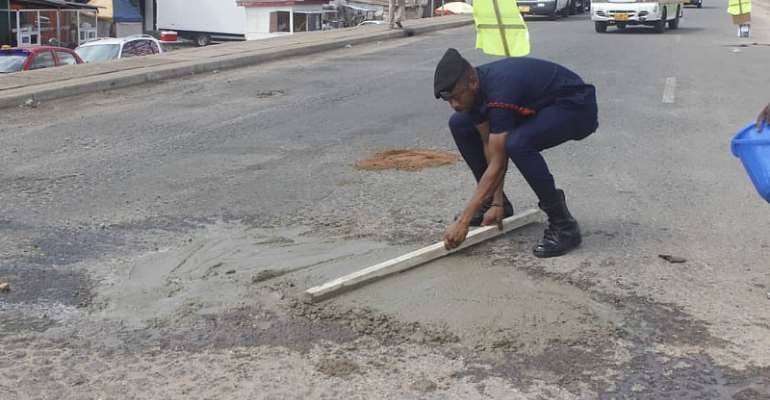 Ghanaian Police officer, Lance Corporal Simon Agbeko who works with the Accra Regional Police Command and noted for giving back to the community and fixing damaged projects has embarked on another in the country.

The junior police officer has become something of a folk hero to the people of Ghana after he spent some days temporarily filling in some treacherous potholes which pose death threat to drivers and passengers.

Simon Agbeko first became inspired to patch up some of the road hazards at the Achimota overhead and the Abeka junction after he drove over the particularly nasty pothole.

Speaking to this reporter, he said he filled up the potholes to avert accidents.

The project, he said, forms part of his road safety campaign to the pedestrians, drivers and motorists.

Rather than waiting for the city authorities to fix the potholes, Agbeko grabbed a shovel and started shifting gravel and road fill and moving it into the potholes.

Now that passing traffic has packed the filling into the holes, he said the road is significantly better.

Additionally, passing motorists have expressed their gratitude towards the roadside vigilante.

In August this year, Lance Corporal Agbeko repaired a broken traffic light at Odorkor with his own money.

The damaged traffic light which faces a different direction, we are told since it got spoilt has been creating a lot of problems for cars and pedestrians moving from either side of the road.

He said the faulty traffic light poses a grave danger to motorists and other road users.

He, therefore, appealed to the city authorities to help fix all broken down traffic lights since it poses danger to lives and properties.

He also donated wheelchairs to random physically-challenged persons on the streets.

The officer purchased canes and crutches as well for these people, some of whom he locates in various mosques and homes across the capital.

He described these charitable acts as a manifestation of divine directions from God, which he receives in his dreams.

Lack of repair works on one of the major roads in some parts of Accra has left the road infrastructure with dangerous potholes.