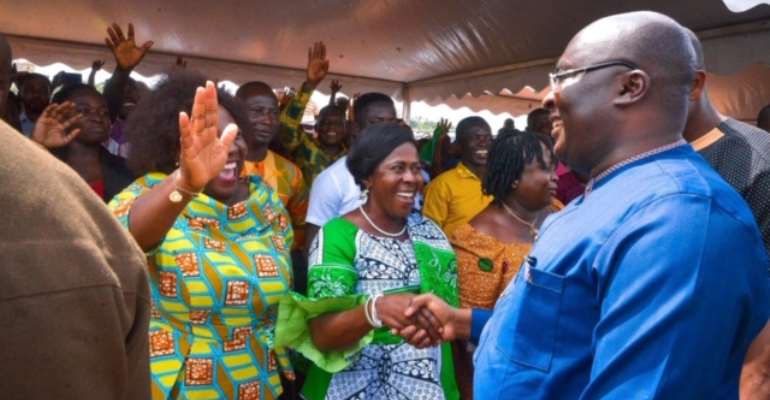 Activities in the District capital came to a standstill as His Excellency Mahamadu Bawumia led a powerful government delegation to cut sod for Road construction in certain parts of Atwima Mponua.

The communities to benefit from the barter agreement between the Government of Ghana and the Sinohydro of China have been on the drawing board for sometime and it became a reality today.

Scores of people from all the catchment areas thronged the durbar site to be part of this perpetual novelty, which has never happened in the history of the district.

Honorable Simon Osei Mensah, the Regional Minister was full of praise for the Vice President. He used the opportunity to educate the masses on the upcoming referendum and beseeched them to vote YES.

The Member of Parliament, Honorable Isaac Asiamah heaped praises on the DCE, Honorable William Darko, the citizens of Nyinahin and the Regional Minister for battling it out with Exton Cubic who by overt and covert action by the erstwhile Mahama Administration, gifted them a large chunk of the national asset.

The Sports Minister asked the gathering to brace themselves for more developmental projects.

The overlord of Nyinahin, Nana Amanpene Boateng Twum II thanked the government for giving Atwima Mponua its fair share of the national kitty.

He advised his subjects to cooperate with the contractors by moving all stalls which are in the streets of Nyinahin for smooth take-off of the project.

Nana Amanpene Boateng Twum II pleaded with government to, as a matter of urgency, add Nyinahin-Adupri road to the contract.

He asked government to expedite action on the Tanoso-Abuakwa dual carriage road which saps enough energy off commuters who ply that route.

Bringing his nice and ear-pleasing message to an end, Nana Boateng Twum, asked his subjects for unity and peace in Nyinahin.

He advised people bury their differences for a prosperous Atwima Mponua; which was met with a resounding clap from the gathering.

The Roads and Highway Minister, Honorable Amoako Atta, pleaded with the gathering to help achieve the developmental agenda of government.

He mentioned that, this is the first phase of roads to be constructed and it includes Nyinahin-Kyekyewere, Nyinahin Town Roads, Kwanfifi-Apenimadi and Mpasatia-Abompe.

He mentioned the documentation for the second phase is far advanced and it will include Nyinahin-Awesesu and other Roads which span to about 100km districtwide.

He promised the Roads to be constructed are first class roads which will last for about 30yrs.

Before the indefatigable Vice President would mount the podium, little Edna Appiah Kubi of Srebourso gave a poetry which got everyone standing.

His Excellency Mahamadu Bawumia in his elated self congratulated the gathering for the epoch-making event.

He maintained that the Akufo Addo led administration has developmental agenda that if embraced fully, will end Ghana’s woes.

He mentioned that the Sinohydro facility is an achievement unparalleled in the annals of Ghanaian history. He together with Nananom went to the site to officially cut sod for the commencement of this novelty. 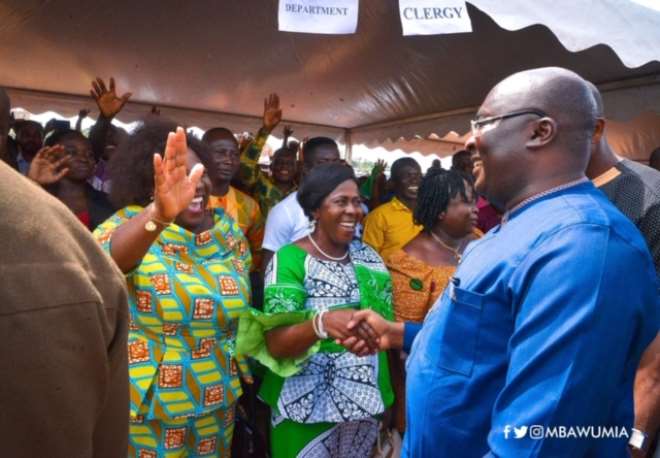 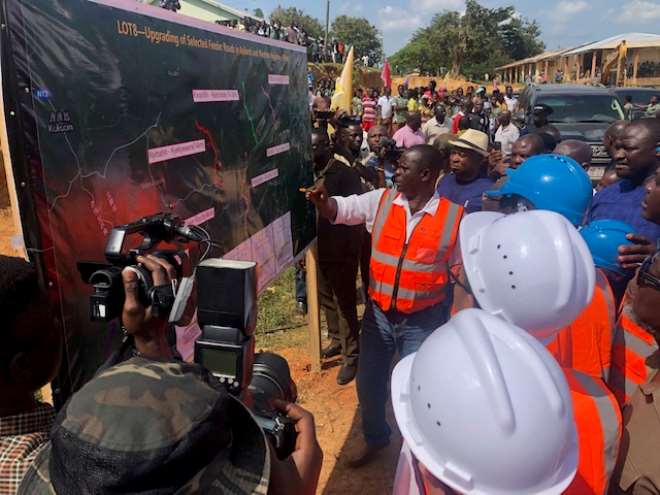 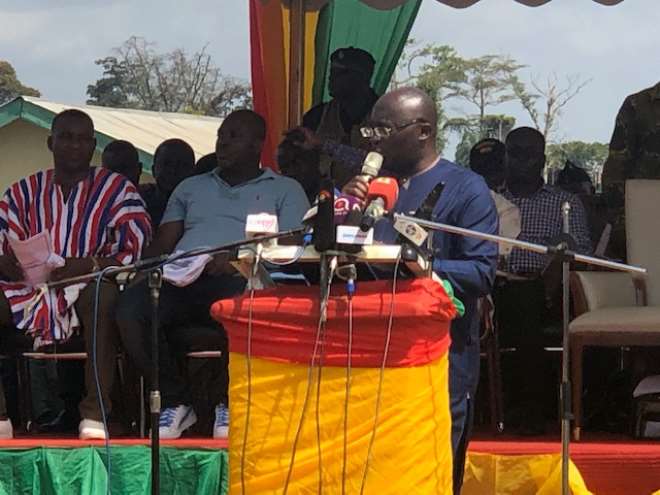 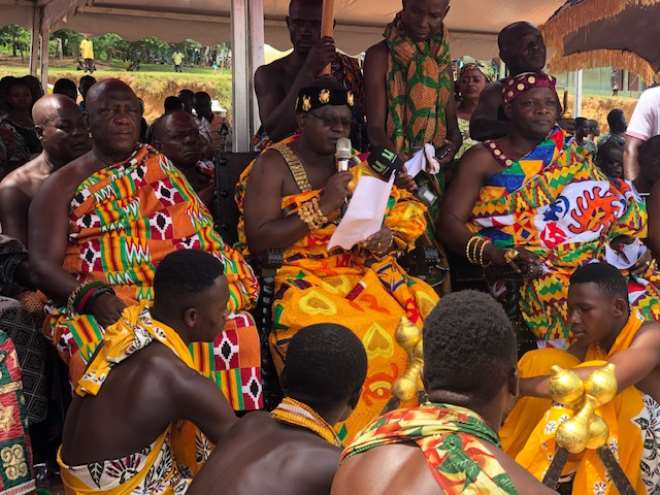 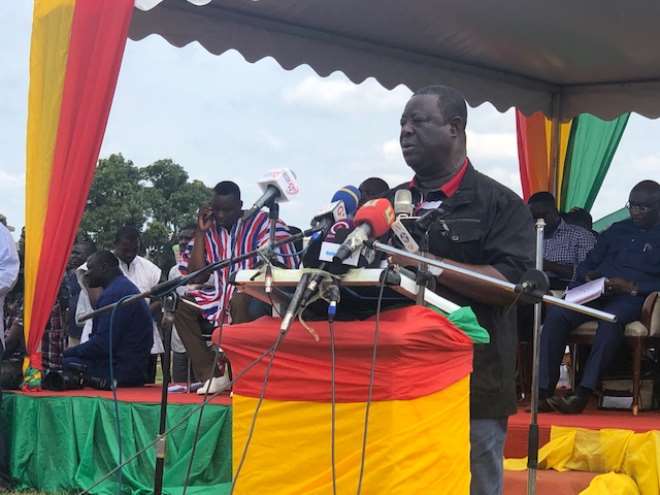 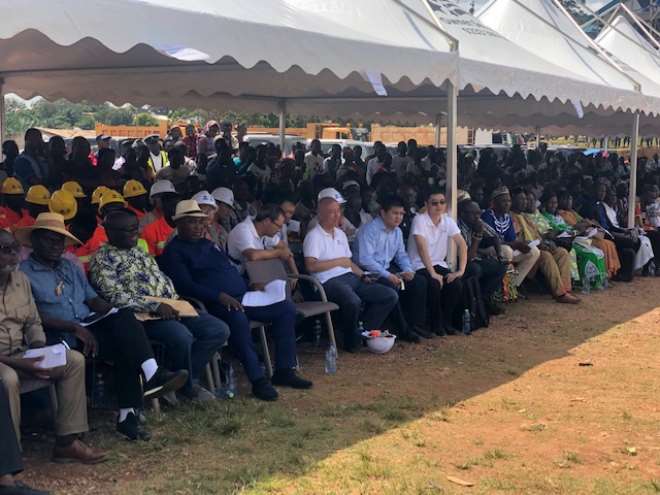 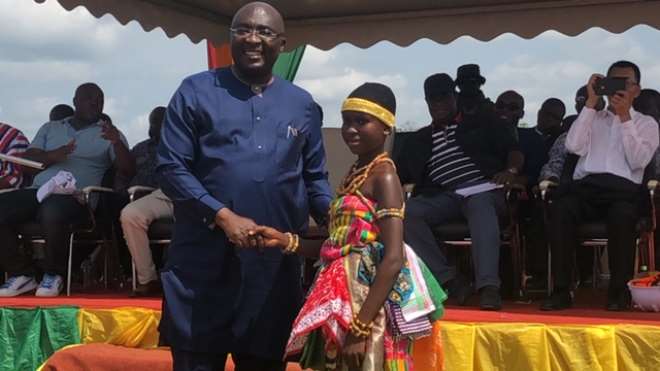