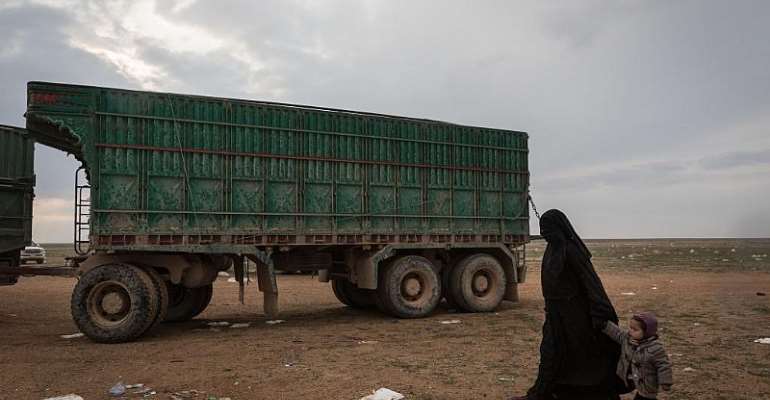 A 38-year-old French woman is facing up to 14 years in jail for child abduction and neglect after taking four children with her to join ISIS in Syria. One of the children is still missing.

The accused is Jihane Makhzoumi.
Since Monday, the 38-year-old has been appearing before a special court in Paris to explain why she and her partner decided to travel to Syria with their four children, and why one of them is still missing.

She faces charges of belonging to a terrorist group, child abduction and neglect.

In August 2014, Makhzoumi and her partner Eddy Leroux left their home in Isère in eastern France to join ISIS after becoming radicalised.

They left with four children from their previous relationships: two girls on Makhzoumi's side, and one girl from Leroux, all aged between 3 and 5, as well as a fourth child, a three-week old baby from their union.

"I left on an impulse, without thinking," the accused told judges, saying she had believed the propaganda of the Islamic State, who promised fighters a better life.

Living nightmare
Makhzoumi soon realised that it was a trap, and by the end of 2014, she wanted to leave, blaming their departure on her partner Leroux.

"It was a nightmare. For two months, I stayed inside, the whole time with fear in the pit of my stomach, terrified by the bombing," she says.

In July 2015, her partner Leroux is believed to have been killed in fighting.

Makhzoumi claims she then tried to obtain custody of her partner's daughter, Jana, from a tribunal run by the Islamic State, in vain.

The 38-year-old mother was arrested in October 2016 at Charles de Gaulle airport with her three children, but Jana was missing.

Makhzoumi told the special court that she had done everything in her power to get the child back. Prosecutors are not convinced.

Jana's mother Ilham Tarbouni has heard no news of her daughter for more than three years.

"This trial will go down in history as the trial for Jana, and the trial for all the children who have been taken unknowingly to a war zone," defence lawyer Samia Maktouf said.

The prosecutor's office is calling for Makhzoumi to be sentenced to 14 years in prison. The verdict is expected later on Friday.