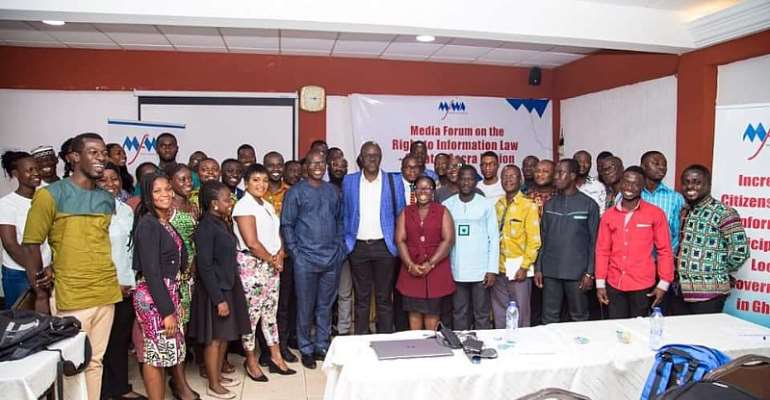 The Media Foundation for West Africa (MFWA) Thursday organised has trained journalists in Accra with in-depth knowledge ahead of the implementation of the Right to Information (RTI) Act in 2020.

The one-day training for news editors and senior journalist is part of a series of forums being organised by the MFWA seeks to empower media practitioners and Metropolitan, Municipal and District Chief Executives (MMDCE’s) in the Greater Accra, Ashanti, and Northern regions on ways to fully utilise the RTI ACT.

It also forms part of activities under the MFWA’s project of increasing citizens’ access to information and responsiveness on the part of local government actors in 20 selected districts across Ashanti, Greater Accra, and Northern regions.

At the forum yesterday, the Resource Person, Lawyer Sampson Lardi Anyenini delivered a presentation on the new Law while touching on key components including the exemptions as well as how to access it.

At the end of a very fruitful exercise, the legal practitioner appealed to the media to thoroughly study the content of the RTI ACT in order to be able to offer the needed education to the public in a bid to hold public officials accountable while demanding for transparency.

“As media people expected to look for answers for the people, we must take time and ensure we study the RTI Act 989. If possible we should make it our second bible because if we do not know its content we cannot educate others on it”, Lawyer Sampson Lardi Anyenini said.

He further stressed, “You have to learn in order to be able to teach others and so what am pleading for is for journalists to do our part and study the Act so that we can give the right education to the public”.

The Executive Director of Media Foundation for West Africa, Mr. Suleman Braimah stressed that Journalists need to study and understand the law before running commentaries.

This, he added, will equip journos to gain proper understanding of the law to effectively educate their listeners, viewers or readers on access to key information.

“For the public to know [about the RTI Law] we think that the media has a very crucial role to play because critically we are the educators. Before we can do that we ourselves must also know what the Law is about.

“And so essentially this is what we seek to do to try and empower ourselves in terms of understanding the law, in terms of getting to know how we can assert our rights within the law as citizens at first and also as journalists who are to educate the citizens”, he observed.

About the RTI Bill;

The RTI Bill is enshrined in Article 21 of the 1992 Constitution and gives citizens the right to demand information from public institutions even though there are certain exemptions.

It was however relaid in Parliament in 2018 and was subsequently passed in March 2019.

Following a presidential assent in May, the Law is expected to be implemented from January 2020.

It seeks to foster a culture of transparency and accountability in public affairs and to provide for related matters.