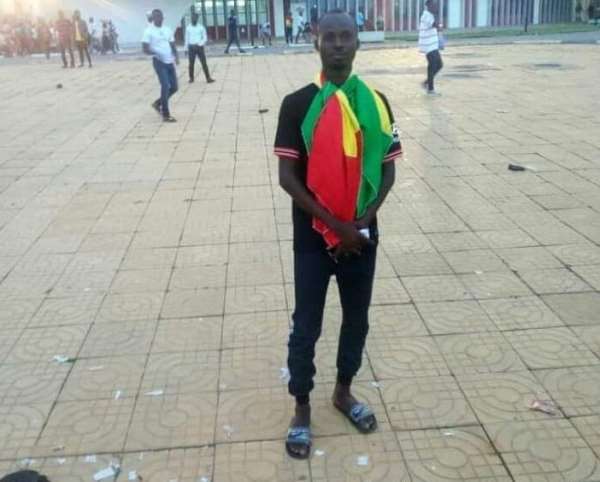 Qualifications to the African Cup of Nations slated for Cameroon in 2020 had just begun. The Black Stars of Ghana were scheduled to play the Bafana Bafana of South Africa. Fans set aside their disappointments and disdain and trooped to Cape Coast Stadium to watch their heroes in the national colours, though they were not wearing the colours of Ghana.

Unexpectedly as it was, a certain Awal Sulemana form nowhere who invaded the pitch in the 84th minute when the stars were 2-0 ahead. The security forces present were gasping for breath to clamp him down. He was eventually hacked down and detained by the police. No wonder we are told he is a 400meter runner.

We woke up to hear that he had been slapped with Unlawful Entry and Offensive Conduct conducive to the breach of the peace. His detention caused divided opinions. The charges as interesting as it maybe isn’t my point of interest.

The stadium is set up to bring fans as close to the actions (their heroes) as possible. Pitch Invasions do happen across the globe as passions run high and fans look to get closer to their heroes. What then is pitch invasion and how did it all start.

In the Northern part of America, pitch invasion is also called field invasion, field intrusion, rushing the field or storming the field and is referred to as when an individual or group of persons eventually ran onto the playing area to either celebrate or protest an accident.

Pitch Invasion in America is common in College and High School Football when a team pulls off a major upset, defeats a major opponent, ends a long losing streak or notches history making win.

Pitch Invasions are not uncommon but not as frequent nowadays in top-level football, but historically it was common for the supporters of the winning team in a major match, such as Cup Final to troop onto the pitch after the final whistle.

For example, in Kenneth Wolsteinholme’s famous “some people are on the pitch, they think it’s all over – it is now”, comment on the 1966 World Cup Final. There were fans who had encroached the pitch before the end of extra time.

Pitch invasions became less common after the 1970’s and 1980’s. Counter intuitively, in that period that fans were barricaded in the stands by fences yet invasions were common. After the Hillsborough disaster in 1989, the barricading form of supposed crowd control was abandoned and pitch invasions became rarer.

Pitch Invasions have long being a tradition of Australian Rules football. At the end of Australian Football Match, it was traditional for supporters to run onto the field and celebrate the game and play a game of Kick-to-Kick with their families. Supporters were also able to do this during half-time. It is also a tradition for football fans to engage in a mid-match pitch invasion when a player reaches a landmark.

Pitch invasion has become part of football folklore, such as the famous incident of the pig named “Plugger” being let loose onto the pitch.

In some parts of America, pitch invasion is has been criminalized. For example, the Southeastern Conference Bye-Laws has a progressive fine policy adopted in 2004 for major sports.

All Football Pitch Invaders from recent football matches held in Singapore Sports Hub have been handed over to the police. The development comes after several spectators took to the pitch during a friendly between Brazil and Senegal on Thursday October 10, 2019.

During a World Cup qualifier between Uzbekistan and Singapore five days later, a fan was observed to have rushed onto the area between the pitch and the stands, where he congratulated the Uzbekistan fans.

The Federation of International Football Association (FIFA), developed a sustainable document meant to guide its affiliates dubbed “FIFA Stadium Safety and Security Regulations” intended to make organizers of FIFA vents aware of their responsibilities and duties before, during and after matches in relation to safety and security at the stadium.

Should Ghana not learn from the infamous Awal Sulemana’s incident and continue to enhance safety and security measures at the stadia across the country?

Ghana as a country has recorded several football offences

Moving forward Ghana should consider following the footsteps of her mother, the United Kingdom as they enacted the “ Football Offences Act” to deal with football offences.

Six years ago, on match day 3, 5, 6 and 7 the then assistance Coach of Wa Stars Najahu Issah was found liable and slapped with a four-match ban and a fine of One Thousand Ghana Cedis in accordance with Article 50 of the GFA Disciplinary Code.

Again, the Head Coach of Wa All Stars rushed to the laying field of play to insult the Referee and his two assistants and the police had to intervene.

He was slapped with a fine of Five Hundred Ghana Cedis in accordance with Article 35(3a) of the GFA Regulations.

The Famous Alhaji Karim Grusah of King Faisal, confronted the match officials during the break on their way to the dressing room and verbally abused them.

He was liable to a fine of Five Hundred Ghana Cedis in accordance with Article 35(3c) of the GFA Regulations.

Nii Akrofi Smart Abbey of Berekum Chelsea, Alex Arthur of Ebusua Dwarfs, and many others have committed football related offences and were dealt with using the relevant provisions of the GFA Disciplinary Regulations.

One would argue that they are “Football people.” But the who is a football person?

The right to equality and the rule of law is enshrine in the Constitution of the Republic Of Ghana. Regardless, the safety and security of players and fans should be the number one priority.

Unfortunately, people who breach security measures will make the experience worse for all involved moving forward if we continue to overlook proper regulatory measures.

Pitch invasion, pitch intrusion will continue to be AD infinitum