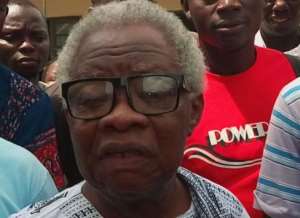 Eleven secessionists whose leader declared independence of a so-called Western Togoland in Ho last Saturday have been picked up in the Volta Regional capital.

Five of them have already appeared in a Ho Circuit Court and are now on remand.

Their arrest by Bureau of National Investigations (BNI) and National Security operatives followed an unannounced hunt for their octogenarian leader, Charles Komi Kudzordzi, aka Papavi Kudzordzi, and key members of the Homeland Study Group Foundation (HSGF).

The secessionist project is being executed under the HSGF, their nationalistic activities having started a few years ago.

The hunt for the actors in the secession project is far from being over as the leader himself is still below the radar of the security agents.

They were part of the many who hosted the 'independence declaration' activities of the so-called Western Togoland.

Some of them are alleged to have performed specific roles during the declaration which took place near the Police Training School in Ho.

Peter Godfriend Edem who was said to be prominent during the declaration was the MC and was very loud as he directed proceedings.

As MC, he was said to have been categorical about the position of the leader whom he described as President Charles Komi Kudzordzi.

One of the suspects, Kofi Agbeko, DAILY GUIDE has gathered, did not dispute his nationality as he told security agents that he is a 'Western Togolander' and a treasurer of the study group.

The activities of the study group are known to the national security apparatus, BNI officers serving in the regional capital having compiled a large dossier about its membership.

It was the group leader's daring of the laws of the land when he took a step to publicize their intention which led to his arrest and other members of the secession group.

Last Saturday, he stunned the nation when at a well rehearsed public show he announced the secession of their Western Togoland from Ghana, a country which by their thinking covers part of the North West, Northern and Upper regions.

'President' Papavi and eight or so others were arrested in May 2019 and flown to Accra for calling for a secession. Many Ghanaians wondered why he would want to engage in such a complex criminality.

At the time of their first arrest, they were thought to be training some youth from that part of the country with military and police training so the 'newly independent Western Togoland' would have the critical complements of sovereign states.

When they were again grabbed in July 2019, the charges of treason, abetment of unlawful assembly and offensive conduct were preferred against them until the Attorney General's intervention.

A picture of Papavi and some of his members derided as his cabinet went viral yesterday and continued to do so.

Everything about them create fun among Ghanaians not so with the intelligence community which is watching their movements now that the leader himself is yet to be nabbed.

He was whisked away in a waiting car as soon as he declared Western Togoland independent. For many, that was the time the security agents should have picked him up not when he has gone into hiding.

While some think he is seeking shelter in the house of persons sympathetic to the cause of the Western Togoland in the outskirts of Ho, others think he could be on the fringes of the frontiers between Togo and Ghana.