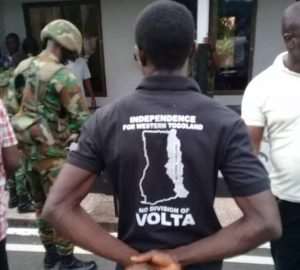 On 5 January 1967, I was at Accra airport on reporting duties for the London Observer newspaper and hoping to run into some of the delegates who were attending the “Aburi Conference” on Nigeria’s future, hosted by Lt-General Joseph Ankrah, chairman of Ghana’s National Liberation Council.

Luck was on my side, for who would be sitting in the VIP lounge of the airport but Col. Odumegwu Ojukwu, then Governor of the Eastern Region of Nigeria and leading actor in the ongoing drama that had been unfolding in Nigeria since the coup d’état of 15 January 1966..

With Ojukwu was Mr E H Boohene, former chief executive of Ghana Airways and an old friend of Ojukwu’s from their Oxford University days. It was through interventions by persons like Mr Boohene that the Aburi Conference had been made possible. Ghanaians in top positions who had an affinity with Nigerian soldiers and civilians of influence, had become dismayed at the prospect of Nigeria carrying out more blood-spilling, fratricidal acts that would inexorably lead to a full civil war of horrendous proportions.

The fears of the Ghanaians were based on the fact Between May and September 1966, killings of Nigerians by people who harboured ethnic hatred, had led to widespread reports that a “pogrom” of Igbos in the North (in particular) was taking place. The figure usually quoted was 30,000 Igbos massacred by Northerners. General Ankrah, to his credit, wanted to do as much as possible to prevent further killings, as he was fully aware that revenge killings would be taking place in Nigeria on the basis of rumours of pogroms.

Under Ankrah’s discreet chairmanship, an “Aburi Accord” was negotiated by the Nigerians over a period of two days. So frank were the discussions that on several occasions, the Ghanaians in the room excused themselves and left the Nigerians alone, so that they could be even more candid in what they told one another. The discussions touched on every controversy dividing the Nigerians, and when they finally signed a unanimous “Aburi Accord”, everyone was hopeful that civil war had been averted.

Col Ojukwu was waiting for a plane to take him back home when I ran into him. Mr Boohene introduced me and I threw in a few questions before the plane arrived. Noticing Col. Ojukwu’s far from cheerful demeanour, I asked him how the meeting at Aburi had gone. He replied – ominously (I thought) -- that”We have agreed to so many things before. But the trouble has always been with the IMPLEMENTATION of what we’d agreed upon.”

Sure enough, when all the Nigerians returned home and their numerous advisers began to go over the Aburi Accord with a fine toothcomb, they began to offer different “interpretation” of the key decisions taken. Disagreements between the Eastern Region and the Federal side were made public and accusations of “bad faith” began to be bruited about. Fed up with what the Igbos considered to be reneging of key points in the agreement by the Federal side, Col. Ojukwu declared on 30 May 1967, that he was establishing a “Republic of Biafra” with himself as its head of state.

A ferocious civil war immediately followed this declaration, and by the time Biafra surrendered on 15 January 1970, hostilities had led to the deaths of an estimated 2 million people or so on both sides. The estimated number doesn't really matter -- Nigeria’s collective psyche had been absolutely torn asunder, by the tragic realisation of what brother could do to brother, in practice.

The Federal Government of Nigeria placed an embargo on imports to BIAFRA (especially food and medicine) during the war and this led to the death from starvation and disease of hundreds of thousands of Ibos, including children. Horrible pictures of starving children with bloated stomachs were published in the world press, and left an image of terrible shame to black people not only in Africa but everywhere. Now, if you were to ask any Nigerian today, what was achieved by the civil war, and he were to answer you truthfully, he might say, “We experienced in full, the unexpected consequences of carrying out ethnically-based politics”. A more sardonic answer might be, “We achieved nothing – other than learning that once war is declared, everything “go scatter” (in the words of Fela Anikulakpo Kuti).

In truth, Nigerians couldn’t believe what they had done to one another. An Igbo Editor friend of mine, described to me, while were having a drink at the Enugu Press Club after the civil war, the peremptory defection of a mutual friend to the Federal side: “We were having a drink at this very spot when we heard a federal bomber approaching. Our mutual friend ran away so fast that the next thing we heard -- he had reached Lagos! And -- surrendered to the ‘Feds’!”

There was no mistaking the pain – and scorn – with which my friend recalled this incident. Many similar personal relationships were destroyed in this way by the civil war. At the end of the civil war, the leader of the victorious Federal side, General Yakubu Gowon, promulgated the noble sentiment that “There have been no Victors, and No Vanquished.” But if you ask an Igbo, he would tell you that the “Victors” had, for instance, neglected to restore to the “Vanquished”, the properties they had abandoned all over Nigeria, as they fled in panic to their Biafran enclave. Other accusations of Federal "insensitivity” are remembered by the Igbos to this day. .

I recall these events in Nigeria because there are Ghanaians who, probably unaware of what the Nigerian civil war did to Nigeria, have begun to follow the same steps that brought the Igbos their greatest-ever ethnic tragedy. Look at what happened at Ho on 16 November 2019:

“A group championing the secession of parts of Ghana along the border with Togo, has declared independence for the territory they call 'Western Togoland'. The Homeland Study Group Foundation (HSGF) announced its separation [as follows]: “Today the 16th of November 2019, the leader of Western Togoland independence, Mr Charles Kormi Kudzodzi, has announced the separation of Western Togoland from Ghana…HSGF has been demanding the secession of the Volta Region and parts of the Northern, North East and Upper East Regions from Ghana….UNQUOTE

According to one report, the HSGF intends to ask the United Nations for recognition for “the new state of Western Togoland”. Now, that is a rather strange request, because it is the same United Nations that, in 1956, organised a plebiscite to find out whether the people of the area (who had hitherto lived under UN Trusteeship, administered by Britain, after the Second World War) wanted to become part of the new state that was to become Ghana on 6 March 1957. The result of the UN plebiscite was that the people chose to form part of Ghana. The UN implemented the result of the plebiscite through RESOLUTION 1044. And that’s how “Western Togoland” became part and parcel of independent Ghana.

Although the plebiscite was cleverly organised, so as to ensure that no minority ethnic group was ignored, it couldn't, of course, satisfy everybody. Many people did vote against becoming part of Ghana. Some people in the Ewe communities, in particular, feared that by becoming part of Ghana, the division which the colonialists had perpetrated against the Ewe peoples (by separating them into German, French and British territories) would be perpetuated. However, the intention of the UN to respect the views of the majority of voters, as expressed in the plebiscite, had been clearly stated before people were asked to vote. And UN Resolution 1044 did not quibble about accepting the result.

It needs to be pointed out that since the plebiscite, people in the Volta Region (which incorporates the Western Togoland area) have taken an active part in governing the whole of Ghana, and actually served in administrations which they had either dominated or with which they had been closely affiliated. For instance, the PNDC [military] Government of 1981-1992 and the NDC Governments that followed the PNDC between 1992 and 2000. The NDC also ruled from 2009 to 2017. If elements like the HSGF were not happy with staying in Ghana, why did they not negotiate with their own “comrades” in government at those times, to take acceptable steps to change their situation? Or are they only prepared to stay in Ghana when they exercise an overwhelming influence in Ghana's affairs? Anyway, how can anyone expect the international community to acquiesce to a challenge to UN Resolution 1044, which settled the matter on the basis of the “free and fair” results of an UN-organised plebiscite?

That the Western Togoland leaders have declared their “independence” only under an NPP administration is no doubt a well thought-out provocation. Their main objective is to destabilise the Akufo-Addo administration. But the NPP would be well-advised to handle the issue with tact and maturity. The NPP Government should therefore be nimble and do everything it can to use persuasion to try and isolate the HSGF and put it on the wrong foot. The NPP has a strong case which it must not undermine with emotional reactions. For instance, ECOWAS is becoming increasingly relevant in the whole of West Africa, what with the coming into operation, soon, of the planned system of currency and trade harmonisation. Does it make sense to try to separate territory from Ghana and give it to Togo (for instance) when Ghana and Togo plan to use the same currency and charge the same import duties, in any case?

Certainly, any action that could lead to bloodshed or the type of economic and social attrition we witnessed in Biafra, must be avoided in toto. History is watching to see whether we in Ghana do "Remember Biafra!" Indeed, It would do us all a lot of good to look again at those horrible pictures of starving children in Biafra, and note that all that suffering brought -- ABSOLUTELY NOTHING in the end.

Finally, is it not sadly ironical -- and I mean no disrespect -- that an 85-year-old man, who is at the end of his own lifespan, should be the one raising the tragic spectre of such horrendous potential suffering, before the eyes of the children being born in ’Western Togoland’?