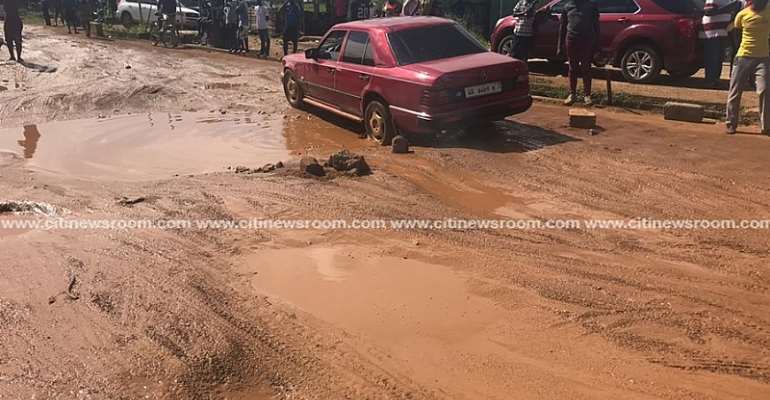 Residents of Manhean in the Greater Accra Region have threatened to boycott the 2020 general elections over claims that government has neglected calls for better roads in the area.

Despite the numerous demonstrations to get authorities to fix their roads, the protests have so far not yielded any positive results.

Already, the residents have threatened another protest which would see about 1,500 community members hitting the streets to drum home their demands.

Citi News' Naa Shika Caesar who visited the area recently reported that residents have vowed not to participate in next year’s polls if the roads remain the same.

“Since we have been neglected for far too long, we are planning another demonstration. But this time around, no car will move for a week. this portion of the road was not mentioned in the budget. I don’t think the authorities have this road in mind. If they don’t fix the road, we won’t vote. No road, no vote! We are bent on this one. We are not going to allow anyone to campaign on our land. We will block them from coming,” one resident noted.

Another one intimated that “we are suffering, so we have decided not to vote for anybody.”

This is not the first time residents of the area, have raised concerns over their deplorable road network.

Their renewed agitations are also coming days after the government declared 2020 as a year of roads with assurances of fixing all bad roads across the country.

In the past, residents have burnt vehicles tyres and blocked major roads with drivers of public transport vehicles known as 'trotro' embarking on a sit-down strike to mount pressure on the appropriate authorities to fix the deplorable roads.

This situation has forced many residents in the affected areas to walk long distances to board vehicles to their various workplaces.

About a month ago, the Municipal Chief Executive (MCE) for the area, made a promise to fix the roads in the shortest possible time after he received a petition from leaders of the communities.

“They should take my words. We will fix the roads very soon. I am going to introduce the contractor to them. I will invite everyone so that we know when he is going to start and finish”, he said.

But the traditional leaders in Ablekuma Manhean, Oduman, Nsakina, Afuaman and Jorma, say they are not convinced by theMCE's assurances to fix the dilapidated roads.

The linguist of the Ablekuma-Manhean traditional area, Emmanuel Ayitey, in a Citi News interview said his outfit will only take the MCE serious if work begins on the stretch.

“Unless I see action I am not going to believe such assurance because it is always said that actions speak louder than words. He has promised so many times so unless we see the contractor and the machines on the stretch, we will not be happy. But if we do not see anything we will still embark on the demonstrations.”