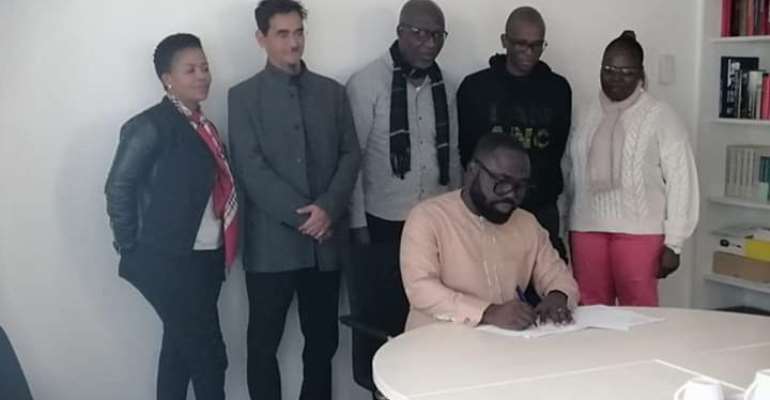 Comrade Otukunor signing the declaration on behalf of the NDC

History was made in Dusseldorf, Germany on Friday, 15th November, 2019 when the NDC Party School (Ghana Institute of Social Democracy) led discussions towards the formation of the first union of Leftist Political Party Schools in Africa, "The African Left Party Schools Union – ALPSU"

The African Left Party Schools Union is aimed at promoting the intensification and pluralization of Leftist political education in Africa.

The Union was given life upon the signing of the ‘Dusseldorf Declaration’ on the sidelines of the FES African Party Schools Study Conference held in Berlin and Dusseldorf in Germany.

The decision was driven by the need to exchange knowledge and experiences in our collective efforts to expand political education in order to reawaken the consciousness of the masses in the pursuit of Leftism, as a vehicle to accelerate the advancement of economic growth, freedom, democracy and the collective welfare of the African people.

Ghana was selected to host the Secretariat ahead of the conduct of the Maiden African Party Schools Conference to be held in South Africa on 23rd - 25th September, 2020.

Comrade Dr. William Ahadzie, the Rector of NDC Party School was selected as the Chairman whilst Comrade, Dr. Peter Boamah Otokunor, a Deputy General Secretary of NDC was nominated to act as the Secretary General of the Interim Executive Committee of the Union.

The Secretariat is tasked to lead the preparations of a Statute and the initial Mobilisation efforts of the Union to bring on board all other Leftist Party Schools in Africa, ahead of the 2020 Conference in South Africa.