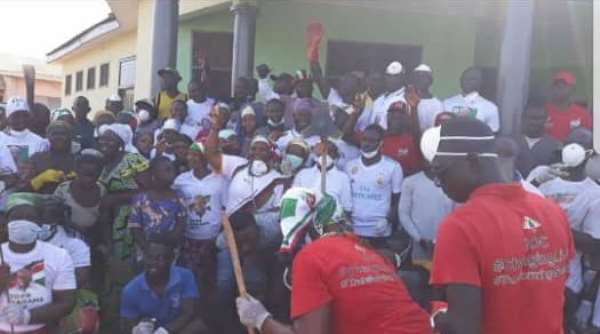 Members of the opposition National Democratic Congress (NDC) today, Saturday, November 16, 2019, embarked on a nationwide weeding and clean-up exercise in a number of constituencies nationwide.

One of such consistencies is Madina where a number of party members and sympathizers clad in party T-shirts took to the Madina Highway to rid the median of weeds.

The move is in solidarity with the party's flagbearer, John Dramani Mahama who had earlier been spotted in a viral video clearing overgrown weeds in the median of the Mahama Road.

Some of those who engaged in the clean-up exercise at Madina earlier today spoke to Citi News.

“We've been able to clear the weeds around the road because if there are a lot of weeds around, it generates mosquitoes. So I'm appealing to everyone that we should come together and help to build a better Ghana,” a gentleman said.

One lady also stated that: “We know what dirt can bring to us so we're here to do a clean-up and we're not going to end it here. We'll revisit [this practice] on the first Saturday of every month.”

“This inspiration is coming from our former President John Dramani Mahama. He implemented this when he was in power and these people [NPP government] came into power and ignored it. This gives us a signal to take it upon ourselves as the NDC to implement this in the first week of every month until 2020 if God permits when he [Mahama] will be restored into power,” one man said.

A lot of criticisms sparked up by Ghanaians when Former President John Dramani Mahama last week Saturday led a section of his security detail to clear overgrown weeds in the median of the Mahama Road.

The overgrown weeds obstructed the view of motorists, especially towards the roundabout.

According to the NDC, the move by Mr. Mahama was a clear indication that the governing New Patriotic Party (NPP) has failed in the country's sanitation drive.

On the back of this, the opposition party decided to embark on a nationwide weeding and clean-up exercise to honour its flagbearer, John Dramani Mahama.

In a memo written to all its constituency organizers, the NDC said this exercise was aimed at addressing the sanitation conditions in every part of the country.

The party said Mr. Mahama's act resummoned the spirit of the National Sanitation Day which was introduced by him.