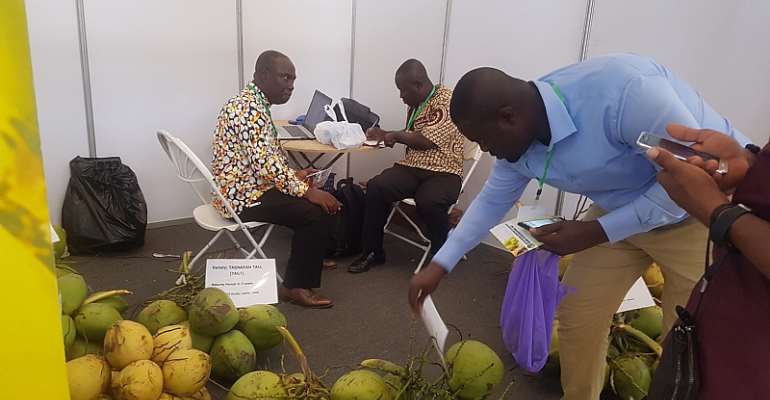 The President of Coconut Federation of Ghana, Patrick Ndabiah, has called on the President of Ghana, Nana Addo Dankwa Akufo-Addo, to consider the inclusion of coconut into the National Tree Crop Authority Bill which is expected to be passed by Parliament by the end of 2019.

Speaking in an interview with Lord Kweku Sekyi, Mr. Ndabiah, said government has a responsibility to champion the commercial cultivation of Ghana’s coconut for export to the international market which has a high demand for the fruit.

He said government must also acknowledge the contribution of the coconut industry in addressing unemployment as well as its potential as a reliable source of foreign exchange to boost the economy.

"We should not underestimate the contribution of the coconut business and its impact as a source of livelihood for millions of Ghanaian youth who engage in the cultivation, processing, as well as sale of fresh coconuts in the local market," he added.

Mr. Ndabiah, who is also President of the Coconut Farmers Association, Ghana (COFAG), said, the first-ever International Coconut Festival, organised by the Africa Coconut Group in partnership with Ghana Export Promotion Authority (GEPA) in September 2019 has not only increased awareness about the business in Ghana, but also attracted investors who would appreciate the inclusion of coconut into the list of crops to be accorded state prominence in the Tree Crop Authority Bill.

The President of the Nursery Operators and Seed Gardeners Association of Ghana, Kwaku Boateng, said, the bill's parliamentary approval will facilitate the setting up of the Ghana Tree Crop Development Authority (GTCDA), to become the statutory body for the regulation of the country's tree crops sub-sector in terms of pricing, adherence to industry standards as well as planning the welfare of farmers.

Mr. Boateng therefore called on the Parliamentary Select Committee in charge of the bill to immediately review the content in order to include coconut, which, according to him, has a potential of earning the country 2.8 billion dollars per annum in terms of revenue.

A Director of the African Coconut Group, Saaka Shuaib, said Ghana can take a cue from Thailand and the Philippines where coconut is a major contributor to the economy due to state support and regulation.

He said coconut is more likely to overtake cocoa as Ghana's biggest cash crop if the industry is prioritised and regulated through initiatives such as the National Tree Crop Development Authority.

During a stakeholder engagement in May 2019, Deputy Minister of Local Government and Rural Development, Collins Ntim, said the government of Ghana will make available a seed-fund of 1 billion cedis for the establishment and running of the NTCDA for five years after the passing of the National Tree Crop Authority Bill.

In October 13, 2019, President Akufo-Addo, during a visit to the Eastern Region, announced that, government, through the NTCDA, will support the cultivation of cashew, oil palm, mango, rubber and shea to enable Ghana reap similar or more benefits just as it gets from the export of cocoa.

Our Biggest Issue Is Jobs - Akufo-Addo
26 minutes ago

Thank You For Backing My Innocence’ – ACP Agordzo
26 minutes ago