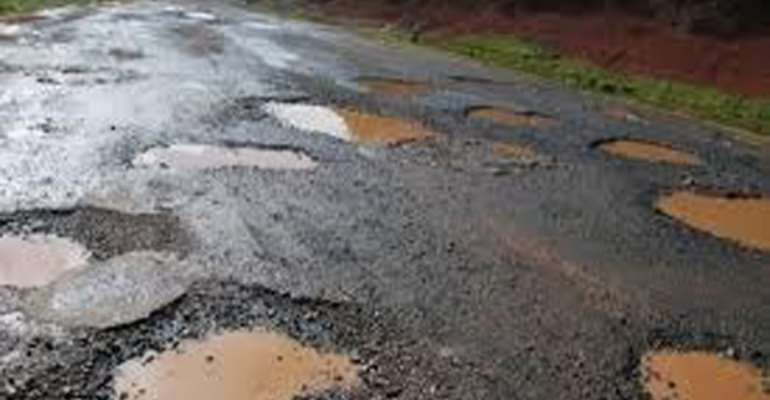 The so-called improvement of the road network under the National Democratic Congress (NDC) so noisily trumpeted by a concentrated dose of propaganda is epic evidence of the deceit of the previous government when juxtaposed against the reality on the ground.

Their successors should not have earmarked such a large chunk of next year's budgetary allocation to the improvement of the road network in the country had what they inherited been in good shape.

The propaganda associated with roads was so perfected that those who hardly travelled across the country fell for the government-promoted lies.

Having pursued the road sector propaganda so consistently, they should have at least raised the quality of the roads to an uptick. That way, they could have had something to point at when they are pushed to the corner unlike the countless potholed roads they left behind across the country. The state of the roads as they stand today against the backdrop of the so-called Green Book of achievements or better still, propaganda presents us with a case study in government-sponsored propaganda in a modern setting.

If propaganda about the economy will definitely be exposed by economic indicators as they pop up, so would the rainy season bring out the truth or lies about a government-touted road infrastructural development.

Properly constructed roads with appropriate drainage would stand the test of a rainy season not so, however, when poor quality work is done or none at all in some instances.

Once upon a time, a Burkinabe contractor was given a rare opportunity of constructing a road in the country. The President in whose interest it was for the Burkinabe to 'win' the contract lauded the foreigner for his 'wonderful' performance. A few years after the so-called good quality      work as touted by the then President, the road has returned to its pre-upgrade state.

On one occasion, the then chopper-flying President John Mahama, while campaigning around the country, mocked Nana Akufo-Addo for not seeing the wonderful road network his government had constructed in the Western Region because he was asleep.

The 'year of roads' which is what next year is going to be as the Finance Minister said yesterday during his budget presentation is a great thing to happen to the country.

The inability of farmers to transport food crops from the farm gates to the markets continues to be a challenge standing in the way of poverty alleviation.

Intra-city roads in both Accra and Kumasi have never been so bad. The propaganda about the asphalting of roads in Accra is still in our memories as pothole-riddled roads are now receiving attention.

Pieces of construction equipment have returned to aspects of the NDC-neglected Eastern Corridor road as evidenced from the commencement of work on the Hohoe-Jasikan road.

A few months ago, an NDC-instigated demonstration against bad roads in the Volta Region made the headlines; 'NDC world bank' comes to mind.

It is gratifying that in the face of the massive road infrastructure there would not be overspending. This is good news and a departure from the previous undertaking.