Will South Sudan finally be able to clinch lasting peace in 100 days? 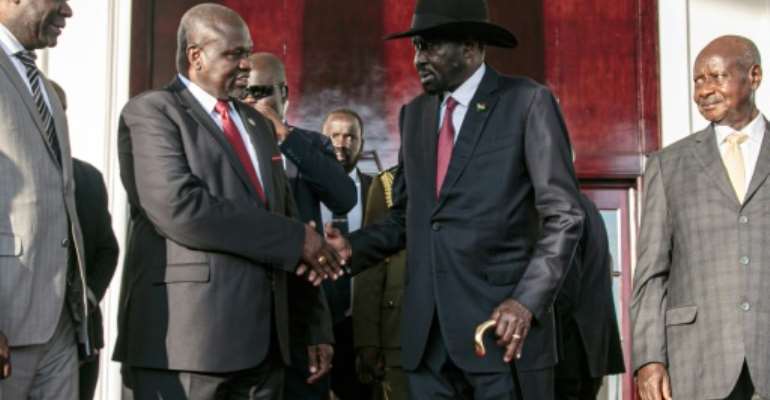 A power struggle between President Salva Kiir and Riek Machar, his former deputy, threw South Sudan into war in 2013. By Michael O'HAGAN (AFP)

South Sudan's president and its armed opposition leader have missed another 100-day deadline to form a power-sharing government, threatening a tenuous ceasefire that has paused years of bloodshed in the world's youngest country.

The warring camps were given another extension to join forces after a meeting brokered by regional leaders but whether another delay will bring peace remains to be seen.

It's not the first time President Salva Kiir and Riek Machar, his former deputy, have faltered on a peace agreement since a power struggle between the two threw the country into war in 2013.

The latest pact, signed in September 2018, brought a rare lull to fighting in parts of the country. But progress toward a more permanent peace has been glacial.

Kiir and Machar agreed to share power in a new unity government by May 2019 but could not break a deadlock over security arrangements and state boundaries.

The deadline was extended until November 12 but that also proved fruitless: six months later, the rivals were no closer to breaking the impasse, and another 100 days were granted.

A cornerstone of the September 2018 peace accord was that fighters would be gathered in military camps, retrained and deployed as a new national army. By SUMY SADURNI (AFP/File)

A cornerstone of the September 2018 peace accord was that fighters would be gathered in military camps, retrained and deployed as a new national army.

But a lack of funding and distrust hobbled efforts to build an 83,000-strong unified force.

Suspicions abound over the make-up and command structure of this new army, and who would control it.

Kiir promised $100 million to bankroll the process but just a fraction had trickled out so far, said Alan Boswell, senior analyst at the International Crisis Group think tank.

"It's a bit unclear what's happened to the money that was released," Boswell told AFP.

Opposition fighters who did report to cantonment sites soon left, complaining of a lack of food and shelter.

The drawing of state boundaries in South Sudan is possibly an even bigger stumbling block. Both sides have long disagreed over the number of states, who should control them, and where boundaries should lie.

Fighting has displaced about four million people from their homes. By Stefanie GLINSKI (AFP)

At independence in 2011, South Sudan had 10 states. But it has since been carved into 32 in what critics saw as gerrymandering of traditional boundaries by Kiir to reward loyalists, a move that angered his opponents.

"He sees this as a part of a strategy to maintain his power in the country. It's not a concession he has any interest in making," Klem Ryan, former coordinator of the UN Security Council's expert panel for South Sudan, told AFP.

Boswell said a deal on states, even a temporary compromise, is "very possible if the two leaders actually want to move this forward".

"The peace deal is stalled, but it's not yet dead," he said.

Machar holds major reservations over his security in Juba and had been demanding a personal protection force to oversee his safety if he returns to the capital.

But Kiir is reluctant to order government forces from the city, keen to keep loyal fighters on hand to shore up his power at the risk of Juba becoming a tinderbox primed to explode.

It has happened before -- in 2016, Machar arrived in Juba flanked by his best fighters for talks with Kiir. Three months later his bodyguards and Kiir's men open fire on each other, and South Sudan returned to war.

"It's just a redux of what we've seen before," Ryan said.

The latest extension, brokered again by regional leaders during last-minute crisis talks, has sharpened criticism of Kiir and Machar and raised fresh doubts over their commitment to peace.

Pope Francis knelt to kiss the pair's feet during a stunning Vatican intervention in April. By Handout (VATICAN MEDIA/AFP/File)

The United States' top diplomat to Africa, Tibor Nagy, openly questioned "their suitability to continue to lead the nation's peace process" amid pessimism over what difference another 100 days would make.

Ryan expected little progress come February: "There'll be some new proposed process or mechanism at that time to keep this going, but the fundamentals just won't shift," he said.

Kiir and Machar have been difficult to budge. Not even Pope Francis -- who knelt to kiss their feet during a stunning Vatican intervention in April -- could facilitate a breakthrough.

Something worth fighting for

South Sudan has spent more than half its short life as a nation at war: fighting has left some 400,000 people dead and forced roughly four million people -- one-third of the population -- from their homes.

But the September 2018 ceasefire is holding. The country is witnessing its longest truce since the civil war began in 2013, though violent skirmishes between non-signatories to the pact are still claiming lives.

The country is witnessing its longest truce since the civil war began in 2013, though violent skirmishes between non-signatories to the pact are still claiming lives. By Stefanie Glinski (AFP/File)

Still, observers say the ceasefire has allowed for higher food production, freer movement of civilians, and greater access for aid to reach parts of the country in desperate need.

The UN Human Rights Council said civilians wanted to start rebuilding their lives and "the leaders of South Sudan owe this to their people, who deserve no less".

A unity government is also a precondition for elections in 2022, and a further delay risks undermining the roadmap toward a democratic vote.