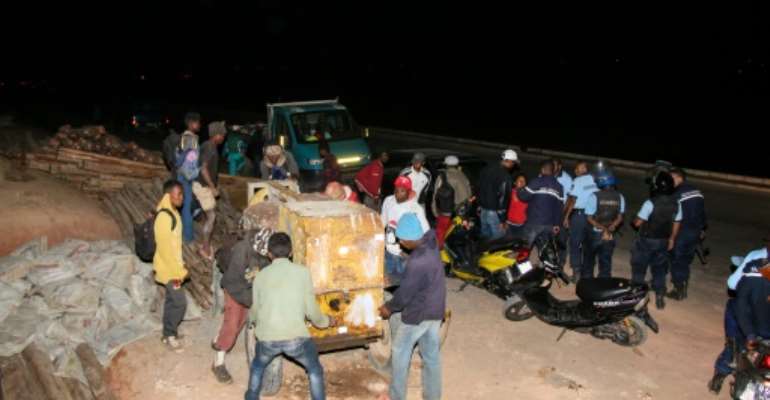 Protestors demonstrating against the expansion of Antananarivo attacked construction equipment last month and clashed with police -- five people were injured. By Mamyrael (AFP)

Anger is boiling over in the hills surrounding Antananarivo over plans to relocate part of Madagascar's choked capital to emerald-green farmland.

Hundreds of farmers in Ambohitrimanjaka village are facing off with the authorities over a presidential scheme that threatens to engulf a thousand hectares (2,500 acres) of rice fields.

"We will not swap our land for money and we will not accept being moved," said Jean Desire Rakotoariamanana, 57, who took part in protests last month.

"These rice paddies provided for our ancestors."

The unrest has been sparked by a scheme to unclog Antananarivo, a polluted city of three million people wedged in the hills of the central highlands.

If the Tana-Masoandra ("Tana Sun") project comes to fruition, the area will house all of the government's ministries, the Senate, a university, a conference centre, hotels and homes for 100,000 people.

Its backers claim that relocation -- to what is the city's distant outskirts -- will cost the equivalent of $600 million (542 million euros) and create 200,000 jobs -- a major economic boost in the impoverished Indina Ocean island nation.

Construction is scheduled to be completed by 2024.

"Antananarivo was built to house between 300,000 and 500,000 people, but today there are 3.25 million," said project manager Gerard Andriamanohisoa, who is also an advisor to Rajoelina.

According to UN projections, the capital's population could double within the next 15 years, he said.

Only 36 percent of Madagascar's 26 million people live in urban areas, but the majority of these are congregated in Antananarivo. 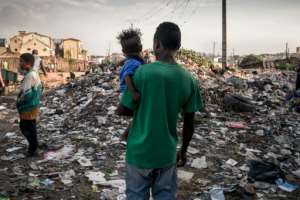 Air pollution, caused by exhaust fumes and bush fires, is sky-high. On one day last month, a monitoring group found that levels of fine particulates were eight times higher than guidelines set by the World Health Organization (WHO).

But the capital's problems gain little sympathy in the village of Ambohitrimanjaka, which lies around 12 kilometres (eight miles) from the capital.

And the government's offer of relocating the farmers 700 kilometres (435 miles) away in the town of Bevoay, spiced by the promise of a five-for-one land swap, has gained little traction.

Madagascar is one of the world's poorest countries. Around 80 percent of the population lives off agriculture, and rice is the dominant food crop.

"We are not opposed to development and progress," said 60-year-old paddy farmer Dada Leba.

"But let the president set up his project somewhere else. It is not land that we're short of in Madagascar."

Referring to a revered 18th-century monarch, Leba added: "King Andrianampoinimerina himself awarded these rice paddies to our ancestors and bequeathed to us the responsibility of farming them.

"Going against this wise king's wish will cast a curse on the president," he said darkly.

"If they take our land away from us, we'll have nothing to live from," declared Dede Antsahamarina, 60. "This new city is not intended for uneducated farmers like us." 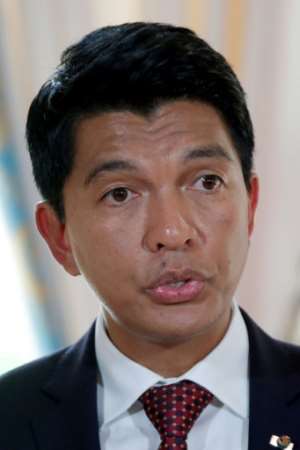 Violent clashes broke out between police and protesters last month over the building of a bridge designed to link the planned complex with Antananarivo.

One civilian and four officers were injured before police fired warning shots to disperse the crowd.

The government has tried to ease the mood by offering around 700 families the equivalent of around $20 million (18 million euros) in compensation.

"We are going to implement support measures to provide retraining for the farmers or to relocate their activities to other places," said Andriamanohisoa.

The president has sent envoys to try to talk the farmers around and made a direct pitch to them on the airwaves.

"If you've got a one-hectare (2.5-acre) rice paddy... listen, I'll give you five hectares in Bevoay," Rajoelina said on TV.

But rather than backing down, the farmers say they are considering filing a lawsuit against the grand plan.

The Battle of the Rice Fields, it seems, has only just begun.