Akufo-Addo Is Becoming More Wicked Than We Thought – Akamba 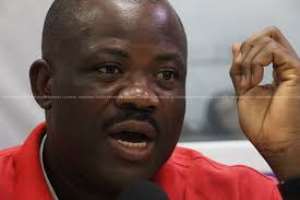 The outspoken National Organizer of the opposition Opposition National Democratic Congress (NDC), Joshua Hamidu Akamba has described the President, Nana Akufo-Addo as the ‘most wicked President’ he has ever seen in Ghana.

Speaking in an interview with Kwame Tutu on ‘Anopa Nkomo’ on Kingdom FM 107.7, “Joshua Hamidu Akamba said, “He is becoming more wicked than we thought. We felt he would have been a democratic leader considering his background as a lawyer, but he has become a tyrant and a wicked president.”

In his view, the president is a man who is heartless, evil and always treat people badly. the hardship Ghanaians are going through has never been recorded in the annals of Ghana’s political history.

Such disparaging and counter-intuitive conducts, depicting congenital buffoonery must not only strike every conscionable Ghanaian a cord of discomfiture but must be sources of consternation to all and sundry.

He expressed strong optimism for victory in 2020 where the NDC will come back to power to deliver Ghanaians from the hardship they are going through.

He admonished voters to vote the NDC back to power because it remains the only party with the competent people.

For NDC, hardship and corruption under President Akufo-Addo will be among some key factors that will lead to the New Patriotic Party’s (NPP) defeat.

According to him, the economic mismanagement by the NPP administration has brought untold hardship to teachers, drivers, traders, farmers, and public sector workers, among others.