Hypocrites Makes Tinubu Run As Next President Of Nigeria 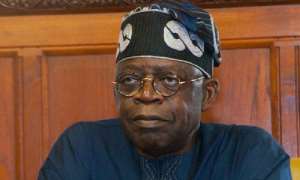 Watch out for those pushing Amoda Yekini Ogunlere alias Ahmed Tinubu as the next President of Nigeria. While his ethic group, Yoruba may love him as a shield or the crafty politician best suited against Yoruba prowlers, the role of the President is not for him. Those pushing his presidency are either fake or fraudulent individuals. Nobody deals with blemishes within Yoruba better than the Yoruba themselves.

Shine your eyes, Yoruba has never stoop that low to present such a character as their best or even second best for the Presidency. Indeed, until recently they have stubbornly stayed out as Opposition Party throughout the history of Nigeria than accept the second best as their leader. There is history here, but this is not the place to recite each.

It is true that politics in Nigeria has sunk lower than ever, reflecting the inevitable situation we find ourselves. The political class has been hijacked by those whose only goal is to become foreign currency billionaires. They do not care how they get there and are ready to sacrifice the interest of their Country in the process. Sadly, this is where we are and it will take great effort on the part of the people with goodwill other than money to retrace our steps.

In order to become foreign currency billionaires, these leaders are willing to be recruited as foreign agents, mortgage the future of this and next generations economic survival for their personal vanities abroad, raid our foreign reserve to import junk into the Country, accept Structural Adjustment Program and Devaluations according to the urging of their Neo-colonial masters. Yes, the same ones our fathers fought tooth and nail to regain Political Independence.

Tinubu and those that have stripped us naked in the world markets turning us into the Poverty capital of the world must not be given more opportunities to rule as the best person Yoruba can present for President in Nigeria. If others do, no Yoruba son or daughter should. Yoruba are known to the world to be highly cultured and too proud to stoop that low.

Those Nigerians floating Tinubu as the next President are fake, hypocrite and fraud waiting to disgrace the caliber of leader we as Nigerians in general and Yoruba in particular can present to the world. We have had leaders, both civilians and military that could not step into certain countries for fear of being arrested for a variety of unimaginable crimes not expected from the caliber of the leader of a country.

We have been through this memory lane before. We knew who Ibrahim Babaginda was before he overthrew Buhari and Idiagbon. If most of us were not aware then, many more have a better picture today of why he overthrew Buhari. Idiagbon had insisted on making him accountable for his drug and nefarious activities. Yet, he became a head of state, not by our choice but with the support of military and civilian crooks like him. Little surprise that he delivered us for Structural Adjustment Program to curry favor from international communities shortly after taking over.

The same Buhari that sanitized the consciousness of Nigerians with Idiagbon using Operation WAI (War Against Indiscipline), that was respected for his Spartan lifestyle and use of official military cars, has now joined the Tunde Chukwu and Sule with a taste for foreign travel, luxuries and vanities. He now savors Western taste because he can afford it. Buhari, in his old age: abeg make Ai enjoy small jare before ai die. Na who go wash ime hand with spit by the river?

Manuel Noriega of Panama like IBB, was also a money launderer and drug dealer well-known to international communities that tolerated him as a head of state. As soon as he crossed their red line, thinking he was immune for delivering to them, he was brought to his knees and jailed in the US and France. The Shah of Iran and Gadhafi of Libya were lured into their own dens. No matter how useful you are to international communities, you are only a dog that has its day.

Remember the Great Robert Mugabe. He earned every degree and honors the British could bestow. The day he had enough of their promises, tired of their pledge of support and procrastination for land reform; they turned against him. These lessons we must learn from the past. You will be remembered for what you did for your people, not what you did for foreign communities that cannot wait to hang you by the tree like a common criminal.

All the gold, diamond, uranium, cobalt, land and free trade zones our politicians gave away have made every African Country worse off than we were, unless we missed one country anyone can point to that has survived. There is no other politician that would throw a whole country under the bus than Yekini Amoda Ogunlere. If he could throw his real mother under the bus for power grab in Lagos, why not the whole Country?

The Pharaoh of Egypt died with treasures and slaves wishing they could live another life. It was all in vain, they have become Museum and Amusement Park for the next generation. Even vandals looted their graves and made away with valuable treasures their class could never come close to in the life of the kings. So were ants and animals that fed on their rotten bodies. Our class of looters will not be so lucky. No amount of loot can buy health, as some invalids are wasting away, not to mention when they feed on one another within our “korokoro” eyes!

Tinubu falls short in character below Governor Fayemi, Pastor Bakare and others in his ethnic group with the same ambition to become the President. As well as Vice-President Osinbajo that is far better than him. As for those humiliating the VP, they simply forgot how cool and collected Jonathan was as Vice-President and later as Acting President before we turned against the cabals. Where is Buhari’s trust in Gen. Abdul Bello Dambazau and Co. that flew Yar'Adua into Nigeria by Air-Ambulance without the knowledge of the Acting President?

It is one thing to play Lagosians against one another into power and become a kingmaker; Yekini Amoda Ogunlere cannot fool all Nigerians all the time.

The author has 530 publications published on Modern Ghana.