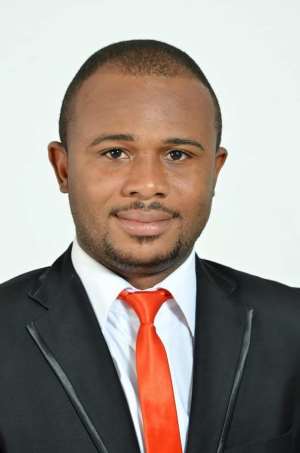 The Bono Regional Secretariat of the opposition National Democratic Congress, held a press conference yesterday, Thursday, 7th November, 2019 in their attempt to lay bare the accurate facts regarding the deliberate lies and misinformation churned out on a local radio station and at Kwatire by the NPP Regional Chairman for Bono, Kwame Baffoe, commonly known as Abronye D.C a week ago, about the state of the roads in Odumasi area and also Contractors who have worked on these roads since 2009.

In the said interview, Abronye D.C claimed, among others, that:

1. The erstwhile NDC government had never constructed or improved the road network in Odumasi area since the party came into existence,

2. The NPP had executed all road projects in Odumasi area and also improved the same through routine maintenance;

3. The Badu - Adantia road (26 km) was awarded to a Contractor by the erstwhile President Mahama administration in 2013, who took away the money involved in the project and refused to execute the project and

4. An amount earmarked for the same road from Petroleum Holding

Fund taken by faceless Contractor for no work done.

Ladies and Gentlemen, we want to, first of all, state that;

Most of the drainage works and bitumen surfacing in Odumasi

b. Under NDC government, periodic maintenance and regular routine Reshaping/Grading of Gravel Road and Cleaning of Ditches

NDC strongly believe that the Odumasi road network under our

current sleeping President, has suffered the worst maintenance in the

history of our region since the NPP-led administration took over in January 2017.

The New Patriotic Party (NPP) administration, led by our sleeping and

inpotent Nana Addo, has neglected maintenance of the Odumasi road network to the extent that potholes on the roads have now become death traps and claiming the lives of motorists and pedestrians here

and there. This, we say, is evident in the neglect or cancellation of some

road projects, challenges with roadside grass cutting and non-cleaning of road shoulders and desilting of drains.

Maintenance of our roads, however, has since January 2017 been persistently poor. Slippery gravel surfaces, soft spots and bushy roadside among others, are still predominant on our roads. Gravel roads have been left almost three (3) years without grading and sectional patching to improve their surface condition. On paved roads, potholes are left many months without patching to the extent that some widen and deepen in sizes and have recently earned a description as “1 Kilometer, 1,000 potholes”. The neglect has been such that today many potholes have become veritable death traps.

The then President of the Republic, H.E John Dramani Mahama

announced in the year 2015, a 450 million dollar package for the rehabilitation of roads in cocoa-growing areas in the country. He said at the time that the amount was to be released in three installments of 150 million dollars annually, to finance selected roads in the Ashanti, Western, Eastern and Brong-Ahafo Regions, under the Cocoa Roads Rehabilitation Project, funded through the Ghana COCOBOD.

The Cocoa roads project which began under the erstwhile National Democratic Congress (NDC) administration was suspended in July 2017 by this sleeping Akufo-Addo led government. This same impotent government deliberately halted construction of all cocoa roads projects

Government after taking office. A whopping amount of $ 10 million (Ten million dollars) equivalent to GH₵54 million was paid to a private audit firm owned by a member of Akufo-Addo’s Council of State to audit cocoa roads contracts awarded by the erstwhile John Mahama

so much financial loss through its reckless handling of the cocoa road projects.

It is sad to note that no provision was made for the people of Odumasi and its environs, in the COCOBOD budget for 2017/2018 period. This means that the cocoa roads which are deteriorating faster than anticipated due to the neglect of the NPP government, kept worsening, making users (mostly farmers) increasingly less productive. The NPP have inflicted untold hardships on road users within Odumase and its

neighboring communities due to their over two (2) years complete inaction in the road sector. We further challenge the Sunyani West Member of Parliament, Hon.

Ignatius Baffour Awuah to come clean on whether funds for the over politicized Odumasi - Kwatire - Adantia - Badu Road has been paid to any Contractor for no work done between the years 2009 – 2017 as claimed by the NPP Abronye DC.

Since all Annual Budgets, Reconciliation Reports and Annual/Special Audited Reports are sent to Ghana’s Parliament, of which he is a Member representing Sunyani

West Constituency since 2009, you are capable of establishing this as a

fact or otherwise. The cause of this poor nature of our road networks under the sleeping and impotent NPP government is the inadequate funding of road construction and maintenance works. For almost three (3) years of the NPP administration, payments for routine maintenance works done have unacceptably delayed. They have been in arrears for many years reaching thirty four (34) months at a point. It must be established, that,

Payments for routine maintenance works during the erstwhile NDC-led administration never exceeded twelve 12 months in arrears. Indeed, the NPP-led government has lost focus on maintenance of roads in the region.

Away from this important historical background, even though we have

to respond to lots of the lies raised by the NPP Abronye DC, these specifically important questions/statements deserve attention and answers:

1. We are still interested in knowing how much tax payers money have been recovered from Road Contractors for no work done since 2017 and its impact on Odumase road network in these

critical period of regular rains. 2. Abronye DC claims on the upgrading of Badu - Tainso -Adantia road in relation to amount released by the Petroleum Holding Fund for work done totaling GHC 2,457,560.69 in 2014. Indeed, there has been bitumen surfacing works, upgrading and major

concrete bridges constructed on the Badu-Adamu road which commenced in 2010 warrants the above stated amount for work done so far on Badu – Adantia Road.

3. Abronye should tell the people of Odumaseman/Kwatire/Adantia the name of the Registered Road Construction Company and the total awarded contract sum for the Odumasi – Badu road in 2013 under Cocoa Road funded Project since Road Contracts are not signed between individuals and government agencies, but a legally registered company with duly classified road classification

certificate from Ministry of Roads and the said government

agency. 4. Abronye D.C should get proper education on road works and

Interim Payment Certificates (IPCs) in order to save himself from this avoidable public embarrassment.

5. Abronye’s blatant lies on Odumasi roads should be stopped by his Member of Parliament, Hon. Ignatius Baffour Awuah to save his

party chairman from public ridicule. 6. We are asking Akufo-Addo to immediately publish the current total contract sum for each Contractor to resume work on various cocoa road projects across the country which was suspended in July 2017.

7. Where are Akufo-Addo’s Agric. road projects he promised in his 2017 Annual Budget?

These and several other questions are what the people are demanding answers on and must be given attention to.