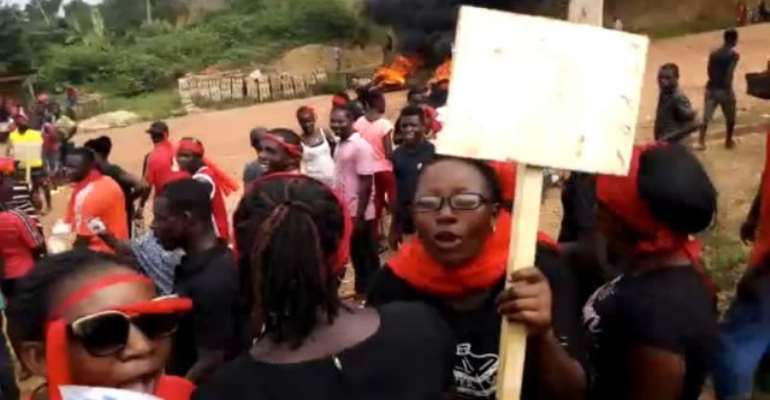 Demonstrators say the government must do more to fix deplorable roads.

Scores of cocoa farmers and traditional leaders at Samreboi and its adjoining communities in the Amenfi West district of the Western Region have hit the streets to protest poor roads.

“The demonstrators who spoke to Joy News had one clear message for the government: ‘no roads no vote,’” reports Joy News Western Region Correspondent Ina-Thalia Quansah.

The Western Region has been Ghana's lead cocoa producer since 1984 but roads leading to the cocoa farms are generally bad.

At least 14 per cent of Ghana's cocoa cash comes from the Western Region and farmers say the government must do more to fix deplorable roads.

Residents of Bolgatanga in the Upper East Region recently embarked on a demonstration over deplorable roads in the capital.

Agitated residents hit the streets on Wednesday to petition the Region’s Minister, Paulina Patience Abayage, over their concerns.

On Monday, as President Addo Dankwa Akufo-Addo commenced his two-day tour of the Volta Region, some activists wanted to hear him address the nature of the state of their roads.