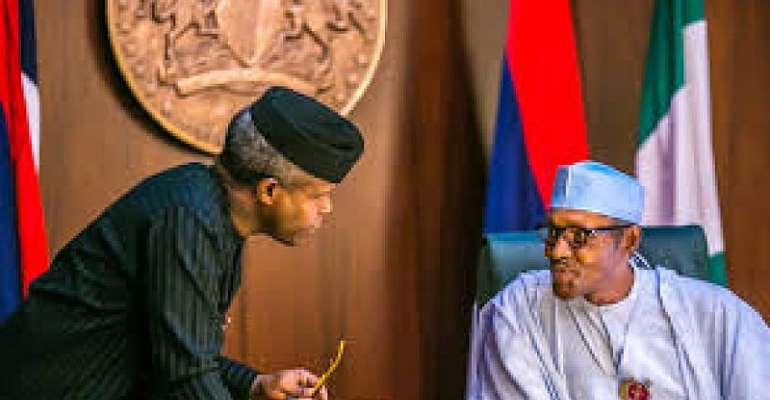 According to Punch, Nigerian Vice-President Osinbajo had more aides than President Buhari.

The Daily Nigerian website claims he had 80 senior staff as opposed to 25 for Buhari, before Wednesday's sackings and redeployments at the Aso Rock Presidential Palace.

Premium Times, for its part, claimed that most of the officials who were handed termination letters on Wednesday were appointed during the 130 non-consecutive days in 2017 when Buhari was undergoing medical treatment in London.

But the Nigerian Tribune reports that some of the senior special assistants , personal assistants and technical assistants affected by the retrenchments were issued their appointment letters only in August, 2019.

The controversy over the sackings comes as the Nigerian leader Muhammadu Buhari remains abroad on a 20-day visit that took him to the Saudi-Africa summit and then to the United Kingdom where he is due to remain until November 17.

He left Abuja without handing over the reins of power to Vice President Yemi Osinbajo as he did in previous occasions, as required by the constitution.

The Nigerian Tribune notes in its coverage of the layoffs at Aso Rock Presidential Villa, that all has not been well between Buhari and Osinbajo since their inauguration for a second term on May 29, 2019.

“Our constitution doesn't give much powers to the Vice President and many of the staff of his office are actually recruited by the President”, says Obadiah Mailafiya a former deputy Governor of Nigeria's Central Bank and candidate of African Democratic Congress in the 2019 presidential elections.

According to The Economist, from 2015 up to May this year, the responsibilities of heading the economic management team were delegated to Osinbajo by Buhari.

Mailafiya believes that Buhari's recent signing-in London of a bill that amended the Deep Offshore and Inland Basin Production Sharing Contract was a clear message to the Vice President.

Premium Times reports that it was Buhari's Chief of Staff, Abba Kyari, who flew to London to submit a new bill on offshore oil fields for his assent.

“They started off extremely well, but it seems as if that trust has deteriorated”, the banker turned politician explains.

Obadiah Mailafiya's views reflect a strongly-worded statement issued on Tuesday by the Afenifere, the umbrella Yorub socio-cultural group to which Yemi Osinbajo belongs.

The Vice-President “has been made redundant as if he is no longer a relevant member of Buhari's government”, complained Afenifere spokesman, Yinka Odumakin, in an interview with The Punch.