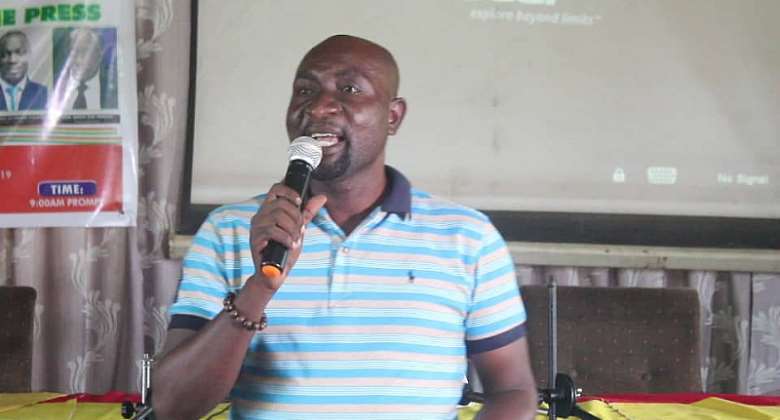 "Cabinet has approved the construction of 30km roads for the Obuasi Municipality. The tender has since been opened at the Regional level for prospective Contractors to be selected for the project."

This was disclosed and confirmed by the Municipal Chief Executive for Obuasi, Hon Elijah Adansi-Bonah in a well attended 'meet the press' program organized by the Assembly on Wednesday, 6th November 2019.

The MCE thanked the Regional Minister, Hon. Simon Osei Prempeh and the Member of Parliament for the Obuasi West Constituency, Hon. Kwaku Kwarteng for their lead role in ensuring that Obuasi gets its fair share of road infrastructure.

He also mentioned plans by Anglogold Ashanti as a development partner to construct asphalt roads in Obuasi. Coupled with the ongoing construction works on the Anwiankwanta - Obuasi road, the Mce said, Government is committed to make roads in Obuasi motorable befitting the status of the mining town.

Briefing the media on the success story of the NPP Government's flagship programs in the Municipality, Honorable Adansi-Bonah said contraction works are ongoing at the Obuasi Senior High and Technical School as part of the Emergency Senior High School project which is intended to deal with overcrowding as a result of the Free Senior High School policy and also end the Double-track system. The project includes a 12 unit classroom block, 2 single storey Dormitory each for boys and girls as well as a 6 Seater Toilet facility.

The MCE mentioned that currently, the population of the school which is the only Senior High school in the Obuasi Municipality, stands at 4,800 who are all beneficiaries of the Free Senior High School policy".

On the Planting For Food and Jobs program, Honorable Elijah Adansi-Bonah revealed that farm inputs such as maize, rice, tomato and pepper seeds, NPK 15:15:15, Sulphate of Ammonia, Liquid Fertilizer and Organic Granulus have been subsidized for farmers in a bid to entice more of them into farming.

Also, 15,000 Oil Palm Seedlings have been distributed to 173 farmers under the Planting For Export and Rural Development program. The program the MCE said is intended to give opportunities for diversification and offer new sources of revenue for Government.

Under the One District One Factory program, Honorable Elijah Adansi-Bonah said three (3) promoters. They are Afoakwa Enterprise Limited, MAP Manufacturing Limited, and LEAPAP who have been approved to establish Citrus, Bolts, and Nuts as well as Palm Oil Extraction factories, respectively. He emphasized that but for LEAPAP, the rest are yet to receive Government loan needed for them to establish their factories.

"Obuasi was not left out in the area of employment. As it stands 610 young graduates have been employed under the various modules of the Nations Builders Corps (NABCO) program in the Municipality"

Responding to questions from the Media, Honorable Adansi-Bonah appealed to the General public to vote YES in the upcoming referendum to make the election of MMDCEs and District level elections partisan. The Electoral Commission has slated Tuesday, 17th December 2019 for the Referendum which seeks to amend Article 55(3) of the Constitution.

Heads of Departments, the Clergy and Nananom were also present.