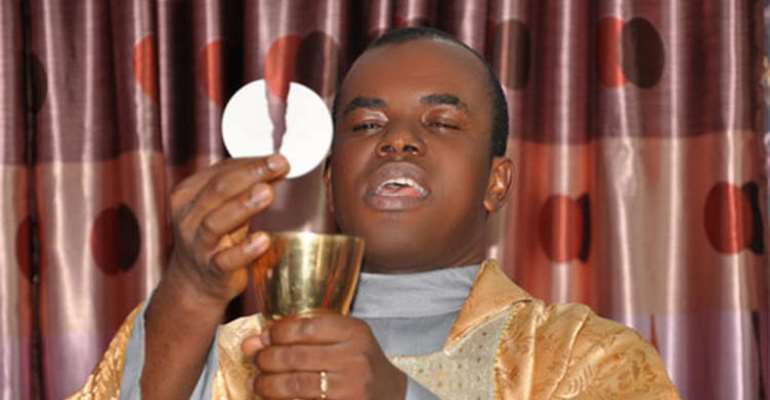 Dear Father, I bring you greetings in the name of our Lord Jesus Christ.

However, I write in respect to your public outburst against Governor Ifeanyi Ugwuanyi over the collective decision by the State Executive Council to restore the original masterplan of Enugu Capital City.

You will agree with me that Enugu State used to be in the league of 100 Resilient Cities Network, a programme of the Rockefeller Foundation based in New York City, United States.

What that status means for the state is that, it qualifies it for many benefits like funding, international assistance in engineering urban resilience which focuses on infrastructural developments of the state among many other things from the foundation.

But because of the existence of some illegal structures in the capital city which were in total disregard to the state's master plan, the state lost that status which the foundation attributed to 'Inaction.'

The economic and infrastructural cost of that lost was much on the state because it had lost a stable funding source for the expansive developmental needs of the city.

Now, raising tax to generate additional revenue source for the development of the state was never contemplated because of the pains it would have inflicted on the masses.

The governor, being a friend of the poor decided to embark on massive rural developments with the aim of opening-up rural access and economy so that some of the residents of the city whose services and skills are no longer marketable in the capital city can now move to those areas to contribute to the economic growth and development of the area.

You will also agree with me that Enugu is not an oil producing state that has additional 13 percent derivation formula needed for infrastructural development, so there is the need for the state to harness the tourism potentials of the state since it is a first choice destination for tourists and holiday makers.

In this regard, it has become very necessary to make the city serene, hospitable and eco-friendly so that it will not only be playing host to domestic tourists but also to foreign tourists who will now be making active use of the Akanu Ibiam International Airport currently undergoing upgradement.

The vision is to leverage on the state's comparative advantage so as to increase it's internally generated revenue profile without putting the tax burden on the poor masses of the state.

Nonetheless, just recently, the global community celebrated World Cities Day on October 31st this year. World Cities Day is a day designated by the United Nations General Assembly by it's resolution 68/239 to promote the international community's interest in addressing the challenges of urbanization as well as contributing to sustainable urban developments around the world.

Because there is a general consensus that urbanization poses sustainability challenges like housing problems, environmental challenges, climate change, infrastructural, health, education, decent jobs, basic services and food security challenges, there is this understanding that sustainable development of urban areas should now be tailored to how cities are planned, designed, financed, developed, managed and governed by relevant authorities.

This is because, cities are now the drivers and incubators of innovation, industry, technology, entrepreneurship and creativity for creating prosperity and social developments for the people.

Therefore, the move to restore the masterplan of Enugu Capital City is a painful but necessary sacrifice that must be made for the sustainable development of the city.

It is also in line with the demands of the United Nations Sustainable Development Goal 11 (SDG11) which talks about Sustainable Cities and Communities.

Dear Father, I believe the decision by the state government to restore the lost masterplan of the capital city should be commended instead of condemnation!

This is because development cannot come without some level of pain. Or should we because a drug is bitter refuse to administer it to a sick patient? Certainly, refusing to do that will definitely lead to the untimely death of the patient which is not what we pray for in our state.

Finally, I will advise that you give a second thought to your hard-line position on the restoration of the state's masterplan because if Enugu State fails, it is not Gburugburu that failed but all the sons and daughters of Enugu State. In the end, posterity will not be kind to us.

Thank you and may God Almighty bless you as you carry out your 'Great Commission.'