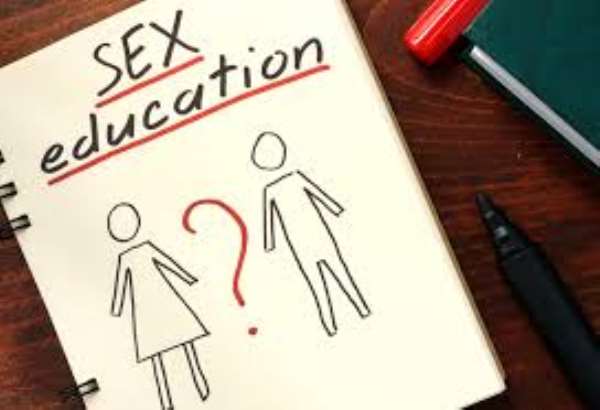 Chances are that, if you were born and raised in Africa, in a country called Ghana or anywhere nearby, you certainly may have learnt everything you know on the topic of sex and even understood the way our bodies function outside of home.

While the information you acquired, whatever the source, maybe the facts on which your sexual skills, knowledge and competencies have been evolving up till now, you certainly "envy" your western peer who is taught about sex by an expert authority at home or in school without being told when they had questions, that they were being naughty.

In Africa, we learnt from our families and our cultures that when children spoke or acted-out sexually, they needed and deserved to be punished and we were frightened by this wild, destructive anarchy.

It is not the object of this scripture to discuss whose culture is what. Societal norms and cultural dynamism doesn't exist without reasons but maybe it will look beautiful when I say the avoidance of sexually related conversations seems to traditional African society a firewall between children and the fire of sex.

Then boom! Your children turn teenagers. And they seem they are years late. Digital media acknowledges with a nod and immediately welcomes them with episodes of nudity and sex. They get all they had been lied about on air and online. Worse yet, they hide what they may be doing from you so to avoid punishment for acting out hormonal urgings. They now know sex after all and anytime you try to rather talk about it, they know you are about to deliver one of your silly argumentative essays to them.

Most parents will quickly conclude in this regard, that, their children are different; that they don't sex-talk with others simply because 'I told them it's bad' or 'I don't see them that way'. While it may be true, this kind of children are most likely to be showing symptoms of fear.

Among the children whom I had observed, there is a strong obsession about sex. They discuss it with friends and look for answers on the streets constantly. Meanwhile, many parents are also uneasy about the effect of interpreting the myth about sex to children.

But robbing children of the opportunity to learn from the right source will push them to learn themselves through experimenting. The fuel of ignorance, combined with the fire of curiosity together ignites in them the blazing desire to search information from the internet and friends. Parents can intervene in the process and diminish their child's sense of isolation. If parents fail to be sex educators, movie directors would do the job for them. Sexual conversation between parents and their children is safer and healthier even than that between a school teacher and a student. A famous African proverb says the claws of a hen does not kill it's chicks.

Last September, a proposed "Comprehensive Sex Education" triggered a national hoo-haa. While it's not coming off for now, the future, like LGBT, remains uncertain.

A quick reminder is that, if children learned how their bodies work, they would be less curious about sex. It is discouraging to learn that parents often respond to their children's acted-out questions on sex with energetic reprimand, a toxic frown or a slap- the same response their parents might have given them scores of decades ago. But if you stick to this traditional approach, in a technological age, to your children, it's unparental. We surely, couldn't help children to solve any problem as long as we think they are doing these things because of the evil in them.

Parents have to evaluate their conversation techniques. You may want to begin by saying: "do you know the first time I heard about the word sex?" And once you have used that too woo your child, you may quickly go ahead, "when did you hear it?" "and where did you hear it from?" "i hope you know all there is to know. If you don't, you can ask me anything" You may also tell them you once asked your mom or dad about something sexual (make sure its something sensitive but be carefully of their age). How they react may suggest what to say next.

This sits at the intersection of a number of thorny questions: the extent of exposure, the safe age as well as cultural tolerances. And these variables remains moot. But, for sure, parental silence in the face of sex education is, of course not a reason but an excuse. Children see it as an interpretation. They assume that we neither notice they have sexual concerns nor think them worthy of attention and discussion. What is more. Its difficult to get to know your children in their teens when they have been conditioned from childhood to follow a strict sexual lifestyle. Starting early would help children and parents through a potentially frightening experience and give them confidence in their parents' ability to offer them sexual guidance in a sexual crisis situation. In the end, you will be relieved of the fears that your children are armed against sexual predators and the numberless contaminated information in the public. But it still looks crazy, given that we are talking about Africa.