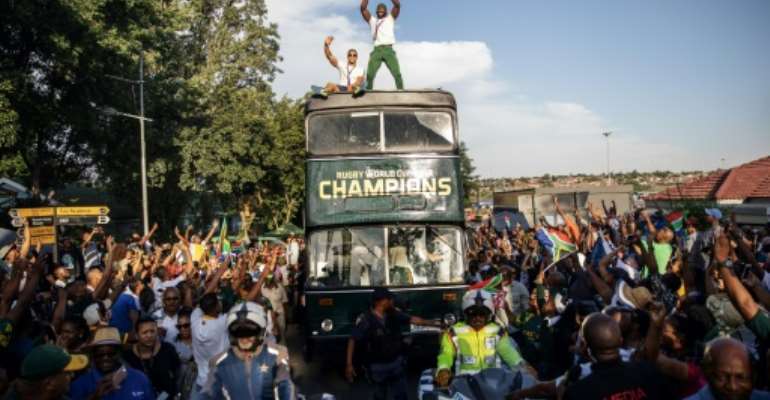 Kolisi stands proud on board the victory bus in Soweto. By Michele Spatari (AFP)

World Cup winners South Africa began their homecoming tour on Thursday with a victory parade steeped in symbolism through the streets of Soweto, the township near Johannesburg where they were once reviled.

The Springboks' 32-12 victory against England in Japan has been greeted with joy in South Africa, where rugby was once the preserve of the white minority population.

Thousands of South Africans came out to cheer the national team that three decades ago was viewed as a symbol of white aggression as black nationalists fought the brutality of the apartheid regime.

"Sport is the real tool that can bring all people together," Vusi Cele told AFP, watching his "heroes" parade before him.

"We have all races here today," the out-of-work 42-year-old added.

"If we can support each other through sport, nothing will stand in front of us. We are together as one for ever and ever."

Another Soweto resident, Elizabeth, aged 80, said: "Today we are one. There is no hatred. I pray it will stay like that."

Soweto is the home of two of south Africa's biggest football clubs -- (Kaizer Chiefs and Orlando Pirates). It was also the former home of Nelson Mandela.

Earlier the victorious Springboks -- bar one notable exception -- had been to Pretoria where President Cyril Ramaphosa joked he was less popular than Kolisi.

After welcoming the team to Union Buildings, Ramaphosa thanked "our warriors" on behalf of a grateful nation and reflected on the huge popularity of Kolisi.

"They've been at war, they won and they brought the World Cup back to South Africa where it belongs," the president said.

"They put us on the world map. We thank them for the impact that this victory has had in our country ... you've lifted the spirit in many people in our country.

"It's good we don't have an election, I would have to compete with Siya Kolisi ... (he) could have been the president."

The one man missing from the first day of the parade was Handre Pollard, the fly-half who contributed 22 of South Africa's 32 points in last Saturday's final in Yokohama.

Pollard had to watch the celebrations from his hospital bed where he is being treated for a fractured eye socket sustained in the win over England.

The 25-year-old posted a picture on social media of himself with a badly swollen left eye socket and an oxygen tube attached to his nose.

"The reception from the public was unbelievable. Not in my wildest dreams did I imagine so many South Africans would turn up on a working day to greet the team."

After Soweto, the Springboks' homecoming tour will take in Durban, East London and Port Elizabeth, with the final leg in Cape Town on Monday.