Destabilisation Plot: Agordzo’s Comment Is A By-Product Of Flawed Democracy 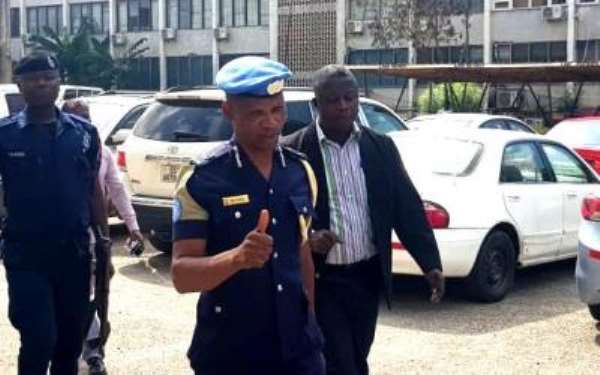 The findings at citadel hospital have since brought about plethora of findings. ACP Agordzo was picked up upon disembarking at the airport from a UN duty. His crime was that he was part of a group of people who was about to ‘take action’ against Ghana and her political leadership. From the counsel who holds brief for Agordzo, his client was picked up as a result of a comment he made on a WhatsApp platform. The comment was that “Ghana was ripe for Arab spring”. He is also said to have made cash and kind donation to a group called “Take Action Ghana” on how to legally embark on demonstrations as well as medical outreach.

Take Action Ghana is a sociopolitical pressure group whose membership is bordered about the future of Ghana vis-à-vis how duty bearers lead Ghanaians into that future. They think Ghanaians are not angry enough relative to the goods we keep getting from democracy, a form of government we collectively adopted in 1992 which have since become anathema. It was during one of the discussion moments that the patriotism in Agordzo’s blood cause him to conclude that conditions in Ghana were ripe for an Arab Spring. Are conditions really ripe for an Arab Spring in Ghana? What is an Arab Spring? What really brought about this animal called Arab Spring? Where was the animal first reared before its adoption into our everyday conversation? A little background: Arab Spring refers to a series of antigovernment uprisings that affected Arab Countries of North Africa and Middle East in 2010. A Tunisian by name Tarek el-Tayeb Mohammed Bouazizi in December 2010 set himself ablaze in protest against autocratic regime, low standard of living, unemployment, violation of human rights among other reasons which later served as a catalyst for the Tunisian revolution and the wider Arab Spring against autocratic regimes. In effect, Bouazizi lost his live to bring leadership to live in his country which later culminated into regional movement by his likes who were in their hideouts but had it up to their necks. In this epistle, I would try to help readers understand that they are many Bouazizis in Ghana only that they are yet to get angry or they are still looking for petrol, matchsticks and lighters.

We have come a long way from dictatorship to democracy. It was our hope that democracy would give us strong institutions that can hold the ruling class to account. Democracy was also envisage to give the voter a voice in how leadership run the affairs of the country. It was also seen as a magic wand to strengthen the cohesive bond among us thereby picking everybody along on a journey to building Ghana. In fact, it was seen as the government of the people, by the people and for the people by Ghanaians as pronounced by Abraham Lincoln. Are Ghanaians really getting value from democracy? I dare say that what we get from democracy is completely antithetical to the intended benefit we set out to get upon its adoption. Partisan politics has divided us more than ever, even to an extent that forums cannot be organized to proffer solutions to multitudes of problems that are militating against the progress of our motherland just because there is unbridled appetite to win and possess political power. On democracy being a donor of strong institutions, state institutions have become Pseudo party offices where jobs are not given on meritocracy basis. The president appoints almost every worker in Ghana. Which proper and functioning democracy operates in this manner? We adopted democracy along the promulgation of a morbid 1992 republican constitution. We commissioned a commission to cure it and take back some of the powers from the president, alas what became of a genuine exercise to amend the constitution? It produced a report that is sleeping on the shelves somewhere like a Sakawa boy who has smoked shisha and top it up with codeine and has since retired to bed. Assuming Ghana was somebody’s business that has commissioned a group of experts to conduct a market survey and thereafter submit a report, would you as a CEO allowed the report to rot? What a country of wasteful lot!

Democracy was touted as an empowerment tool to empower the ordinary Ghanaian to have a say on what the ruling class does in the dark. Unfortunately, it has rather empowered the ruling class to muzzle the voices of the masses, a venture they engage in with great panache. It has incapacitated the elector to shine light on the policies of the ruling government. Courts of law are only independent on paper but are micromanaged from the background. Professionals and technocrats become professional liars and propagandists as soon as they are appointed to serve the national interest. Men in suits bathed in sweet-scented exotic perfumes fleece the state of millions of cedis and get away with the thievery unlike someone who has been caught stealing three tubers of yam apparently to feed himself just to survive. The inequality gap has since become entrenched and egregious.

This democracy has not fought and won the battle against corruption. This democracy has not created the enabling environment for local businesses to thrive and employ graduates our universities continue to spit out every year. This democracy has not proven to be one that can bring the desirable significant change that is capable of making our educational system a peer of the Singapores, the Rwandas and the Malaysias. It has benefited few instead of a lot. Our democracy is adulterated, purposeless, incompetent and meaningless. I think Agordzo’s choice of Arab Spring is what has become the issue. He should have said Ghana is ripe for “Ghanaian spring” since we are allergic to the truth.