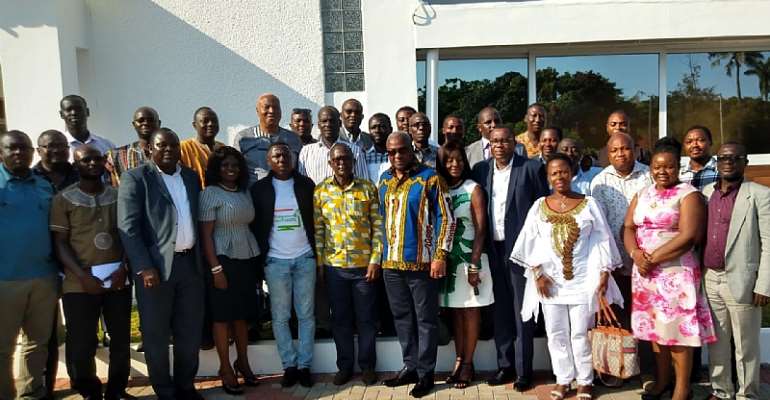 Flag-bearer of the National Democratic Congress (NDC), John Dramani Mahama has said the NDC would give priority to Technical Universities to produce skilled human resources for the development of the country.

According to him, the technical universities have what it take to propel the national development agenda.

Mr.Mahama made this known at a meeting with the leadership of the Technical Universities Teachers Association of Ghana (TUTAG) on Monday, November 4, 2019, in Accra.

The TUTAG meeting with the former president formed part of the NDC and its flag-bearer engagement with stakeholders and key groupings ahead of the 2020 general elections.

The interactions are aimed at sharing ideas, listening to the concerns and expectations of the various groupings which would have a direct impact on the party’s 2020 manifesto.

Briefing the leadership of TUTAG on the next NDC government vision, Mr Mahama said the idea behind the upgrading of the existing Polytechnics to technical universities by the NDC government was to make them more focus on training and producing especially skilled professional for development of the country.

Ghana, the NDC leader said could witness massive development if technical and vocational education is giving priority, adding that the current government has downgraded technical universities and made them second class universities.

He assured the TUTAG leadership of NDC determination to resourced the technical universities when it comes back to power in 2020.

The NDC also pledged to ensure the Bolgatqnga and the Wa polytechnics are equipped with infrastructure to meet the university standard so the two could also be upgraded.

In addition to that, the next NDC government would take steps to build technical universities in the newly created six regions of the country.

While assuring to ensure the technical universities are made to produce the needed skilled human resources for development, the former President also expressed concern about the current government action and inactions to trample on academic freedom.

Mr Mahama said most heads of education institutions are failing to speak out on challenges currently facing the education system for fear of being sacked or sanction.

He described the development as unfortunate as this is a democratic state.

“looks like academic freedom is being trampled on and taken away under this government. All of you in the sector are afraid to speak because you are afraid you will be sacked and so you see a lot of things going on, people have been gagged and headmasters and heads of institutions complain to us quietly but nobody can speak up.”

“This is a democracy and I think it’s an unfortunate development,” the former President stated.

Mr Mahama also called on the government to drop the University Bill, currently before parliament and allow universities to have their separate governance.

In his view, universities have their unique vision and mission and that the introduction of Public University Bill would hinder academic freedom and progress.

"The University of Mines and Technology in Tarkwa do not have the same mission and the University of Health and Allied Science in Ho so why they should have a common academic policy?" he stated.

Dr Solomon Keelson, President of TUTAG thanked the former president and flag-bearer for the opportunity to share their concerns with him and the NDC party.

According to him, the current government is doing everything to place the Technical Universities as Second Class Universities and that funding and infrastructure also remained the biggest challenged.

He said though the idea of the Technical Universities was to produce skilled trained human resources for the country, application for accreditation to run some programmes are often faced with resistance at the National Accreditation Board which should never be so.

Dr Keelson, therefore, appealed to the NDC and its flag-bearer to give priority to the technical universities to deliver as they have the expertise and competent men/women to impact professional technical skilled resources for the development of the country, saying, ” technical education remained the only way by which we can develop Ghana.”

He urged that the next NDC government should do well to revisit the Professor Afetsi Report on the transformation of the Polytechnics to Universities to guide its policies.