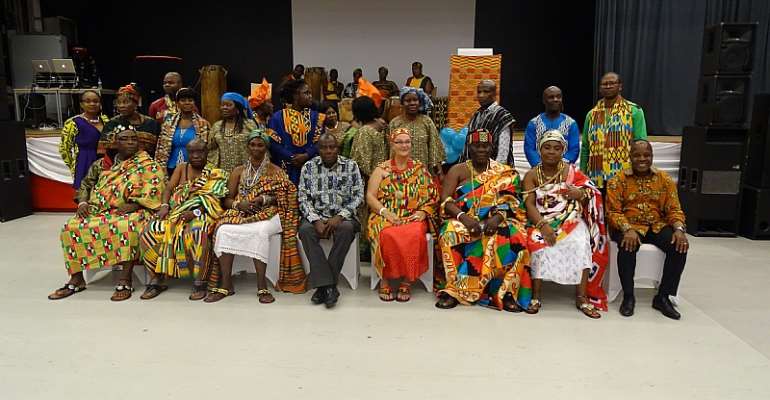 One can nearly say it is becoming a tradition for the Homowo, Asafotufiam and Ngmayem festival to be hosted annually in Hamburg, Germany. The idea to celebrate these three festivals in one was introduced in the year 2018 where three dedicated GaDangme unions have put their heads together to organize such a grand festival.

It´s been criticized a lot in the media and from folks that the GaDangme culture is losing its lineage. Celebrating the Homowo, Asafotufiam and Ngmayem festival is a wake-up call from the unions GaDangme Community Hamburg, KAPSONG Culture Association, Osu Kpee and GaDangme Europe, to further GaDangme individuals to keep this rich culture alive.

The celebration of these three festivals took place on the 19th October 2019 at Alter Teichweg 200, in Hamburg, Germany with magnificent acts and cultural displays.

This year´s festival had a difference in comparison to previous events. The occasion was filled up with entertainments such as cultural acts from the Ogya group in form of drumming and dancing throughout the whole event. Lolo and “Obonu” were been played. The drum “Obonu” with loud sounds drew the highest attention of the inhabitants as well as the visitors. Furthermore, the Chiefs who graced the event performed the festival rite according to the customs and tradition of the GaDangme which is sprinkling of Kpoikpoi within the district Dulsberg where the festival was held.

Moreover, activities such as Kpaa Shimo with the Chiefs, Asafotufiam Cultural display and the “Soo bii” in English “Thursday arrivals” gave the event a different flair.

This year´s event was extra-ordinary. The occasion was occupied with Europeans, mostly Germans who are eager to get to know more about the GaDangme tribe and culture. According to observations, one could see how gleeful they were and comfortable they felt within the Ghanaian community as they dined with all and danced to the tunes from the Ogya Drumming Group.

The 19th October will certainly be a day to remember in the memories of all participants and spectators of this great festival. The Chiefs and Queens present motivated the unions hosting the festival to keep on working on their intentions to promote the GaDangme culture and they as well gave their blessings.

'Give peace a chance', ICoast ex-president tells police
46 minutes ago