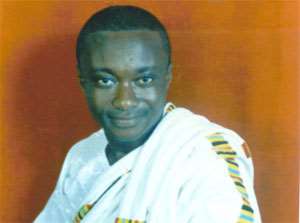 " In the Political Literature, I called for the "importation" of South Africa's model of Truth and Reconciliation to Ghana --- ). It is therefore, rational and logical to conclude that my ideas influenced the President to establish the National Reconciliation Commission (NRC) which he cast me aside and did not allow me to play any role and the same President, Kufuor has continued to cast me aside for Political reasons !!! --- in an unprecedented callousness and ingratitude which no God fearing Human Being could inflict upon his fellow Human Being, said the "Made In America" Politician known for his honest opinions and Moral Courage and like the Biblical David --- always defeats Goliaths in the end !!! .

" Almighty God, through Divine Intervention will grant me Justice and victory someday !!! --- over those who have treated me as a "Political Enemy", vowed the CPP activist who has publicly and privately appe! aled to the CPP hierarchy to condem the President's action of engaging in "State - Sponsored Injustice" and systematically utilizing his ideas without giving him any credit and treating him (Kwame Mayor) unfairly.

" The President's actions are killing Patriotism softly, lamented the CPP activist, who insists that although the New Patriotic Party (NPP) --- as a Political establishment has (not) done him wrong, the President and a [few] of his henchmen --- acting as "Political Mafias", have committed the highest stage of Injustice against him and seek another National Reconciliation II - in order to forgive them because "Father, they don't know what they have done !!!", said "Osagyefo" Kwame Mayor.

" We have a President who has always appealed to Ghanaians abroad to come h! ome and help !!!. And this is the [same] President who has presided over a government that has always utilized Kwame Mayor's ideas without giving him credit and without giving him any compensation - and without even allowing him to participate in the implementation of his own hard won ideas - despite the naked fact that he (Kwame Mayor), has been described by American bureacrat(s) as more educated than about 75 % of America's population - ( intellectually speaking).

" How much more of Ghana's population is "Osagyefo" Kwame Appiah Boateng, "Kwame Mayor" more educated than ?

"Osagyefo" Kwame Appiah Boateng has been consistently discriminated against - for his Political affiliation and has also been discriminated for being an Asante who dared to join a National Political Party - CPP, instead of [any] of the two leading Ethni! c - Based Political Parties, said the first Ghanaian born to run for Mayor of Los Angeles, who recently called for Inter-Ethnic Marriages among all Ethnic Groups in Ghana, especially, Inter-Ethnic Marriages between Ashantis and Ewes in order to unite the Nation.

" There is evidence to prove to the whole World that "Osagyefo" Kwame Appiah Boateng, ("Kwame Mayor"), the 2004 CPP Parliamentary Candidate for Nhyiaeso Constituency, was the [first] to call for "Renaming the Castle the "Black House" --- in order to attract tourism (like the White House) ---and my call to develop the Castle into a Tourist attraction - like the White House, was (immediately) followed by a request to build a "State of the Art" Presidential Palace", "Osagyefo" Kwame Appiah Boateng recently wrote.

" ( It should be noted that about two days after I sent a Press ! Release / (News) calling for a seat of government that would attract tourism - similar to the White House, controversy erupted in Ghana's Parliament over the demand by the Majority side for $30 Million to develop the Flag Staff House --- followed by a statement by a Government Deputy Minister to develop the Castle as a Historical Site ) -- ( * Evidence : Read Sequence of events on Ghana's News Media, example : Ghanaweb.com News - entitled : Rename Castle the Black House" ...) ".

" As the interim President of Ghanaians Abroad Coalition, "Kwame Mayor" diplomatically [contributed] in appealing to the President for the [speedy] implementation of the Dual Citizenship Act, via Press Releases to the News Media and an electronic email to the Castle's Email address. A few weeks after the Press Release, the Dual Citizinship Act was [finally] implemented. --- ( Ghanaians living Abroad are thankful to all those (regardless of Political affiliations) - who made the Dual Citizenship for Ghanaians living abroad possible and for creating opportunities for Ghanaians living abroad to contribute to the development of Ghana). --- (Ghanaians abroad are also thankful to those who support their Right to participate in elections and to the Nation's development, as the Nation adapts to the age of the "New Millennium")", "Osagyefo" Kwame Mayor recently wrote.

" Furthermore, "Kwame Mayor" claims possessing evidence to prove that he [first] called for erection of statutes in honor of the Martyred Judges; [first] called for the importation of South Africa's model of Truth and Reconciliation to Ghana - via his 1996/1997 Platform - a copy was given to His Excellency, President John Agyekum Kufuor in 1999 in Los Angeles --- before Mr. Kufuor became President, (in the company of Hon. Kwadwo Mpiani, current Minister of Presidential Affairs; "Kwame Mayor's 19996/1997 Platform or Political Literature also called for extending Voting Rights to Ghanaians living ! abroad of which copies were sent to Ghana Embassy in Washington, D.C., Mr. Spio Gabral could have been the Ghana's Ambassador at the time Kwame Mayor mailed his documents to the Embassy and Nana Effa Appenteng, Ghana's curre! nt Ambassador to the United Nations wrote to Kwame Mayor later on. The fact that Kwame Mayor mailed copies of his Political Literature to Ghana's Embassy where Mr. Spio Gabral was the Ambassador, provides a clue why former President Jerry John Rawlings mentioned extending Voting Rights to Ghanaians Living Abroad in 1996 !!! - ( Perhaps, as a Political Rhetoric). ---( The same 1996/ 1997 Platform called for "Setting up Truth and Reconciliation in Ghana)".*

" Kwame Mayor's abortive Yaa Asantewaa demonstration's objectives - (copies were given to the former Deputy Police Commander in Ashanti Region, Mr. Opare Addo and the Records office of the Ashanti Regional Pol! ice - ( in which "Kwame Mayor" clearly stated that some of the objectives of the "Yaa Asantewaa Demonstration" were to focus attention on the Neo-Colonialist and Imperialist State of Ghana; a demand for Economic Dialogue with the World's Powerful Economic Inst! itutions to soften thier harsh impositions; a call for a SYMBOLIC GOVERNMENT for a future Continental African Union Government and a call for "Yaa Asantewaa Festival" to be celebrated on an **(annual basis),* etc ---

"Kwame Mayor" insists that it is rational and logical to conclude that his objectives of the abortive "Yaa Asantewaa Demonstration" were faxed or mailed by the Ashanti Regional Police to government --- since it can be proven to all rational minds that Government controlled Radio Ghana was used to broadcast the ruling government's call for a "SHADOW GOVERNMENT" for a future Continental African Union government - (which was part of "Kwame Mayor's" objectives in the abortive "Yaa Asantewaa Demonstration")" !!!.

" All of "Kwame Mayor's" abortive "Yaa Asantewaa Demonstration" have all been announced or implemented by the ruling government since after he had submitted! copies to the Ashanti Regional Police and announced his objectives a number of times on FOXFM Radio station, in a few Months, Ghana weaned itself from IMF and to emphasize once again, Government's controlled Radio was used to announce government's preferance for a "Shadow Government" for a Continental African Union Government.

" Furthermore, since the objectives of the abortive "Yaa Asantewaa Demonstration" were announced, the Center for Culture and its affiliate have announced an (annual) celebration of "Yaa Asantewaa Festivals ".