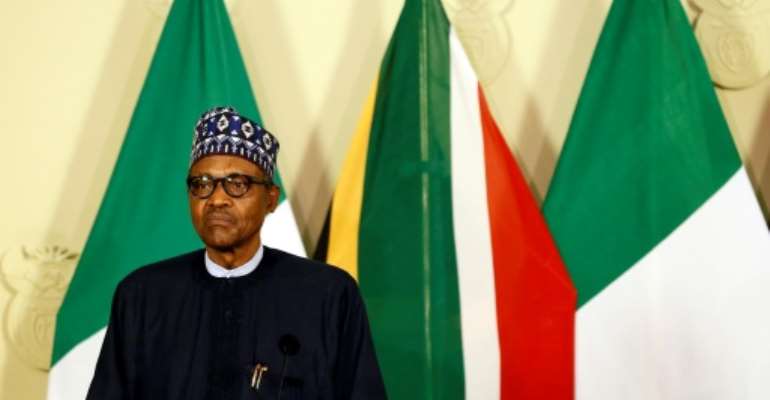 Nigeria's President Muhammadu Buhari has boosted the percent the country gets in deals with foreign oil firms. By Phill Magakoe (AFP)

Nigeria's President Muhammadu Buhari on Monday signed a measure to change the country's agreements with multinational oil companies to significantly increase the share of offshore oil revenue it takes.

"This afternoon I assented to the bill amending the Deep Offshore (and Inland Basin Production Sharing Contract) Act," Buhari said in a statement on Twitter.

"Nigeria will now receive its fair, rightful and equitable share of income from our own natural resources for the first time since 2003," he added.

It is not clear whether the measure will take immediate effect or lead to discussions with oil companies to review their agreements, and Buhari's office has estimated the change will bring in at least $1.5 billion in added revenue annually by 2021.

As oil prices have slid this year, meaning a drop in revenue to the government, Africa's largest oil producer has been steadily increasing pressure on the some of the world's biggest energy companies -- Shell, Exxon Mobil, Chevron Eni, Total and CNOOC -- who extract most of the crude oil in Nigeria.

In mid-October the government controversially claimed oil multinationals owed the country $62 billion in back revenues, which the oil firms disputed.

"We have no idea how the government arrived at such an amount,", a representative of one of the major oil firms told AFP on condition of anonymity.

A 1993 law governing production sharing agreements between Nigeria and oil companies, mandated that the revenue split should be reviewed if prices climbed over $20 per barrel.

But while the price of crude soared far above that point over the past two decades a revision of the formula for revenue sharing was never carried out.

Nigerian officials have said discussions have been opened with the oil companies and conceded their demands are unlikely to be met.

"We can maybe get something from them but not $62 billion," oil minister Timipre Sylva said last month.