Harvesting 'Red Gold' on the rooftops of Paris 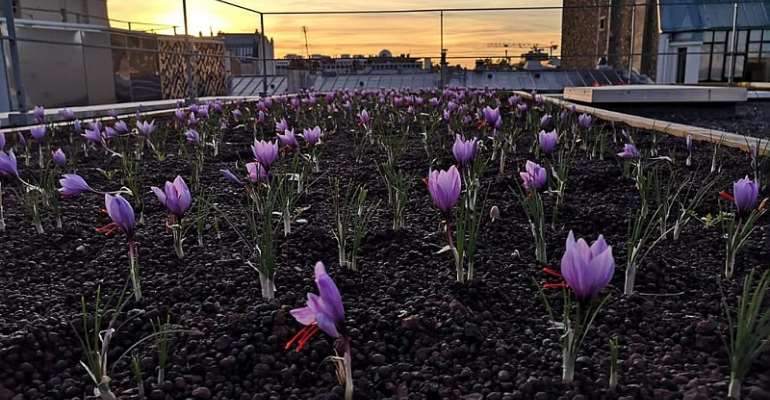 Saffron, the world's most expensive spice, used to be widely grown in France but more or less died out with the arrival of mechanised farming methods. Now four French sisters are spurring on a saffron revival, growing it on rooftops in Paris where it seems to be very much at home.

One hundred fifty tonnes of certified saffron are grown worldwide, most of it in Iran. They're harvesting it now, in the fields of Khorasan and Fars in the northeast of the country.

Here in the French capital, they're harvesting saffron too, but in a concrete jungle, on five rooftops in and around the city.

No matter where you are in the world, it's painstaking work: from planting the bulbs to picking the flowers, separating out the three crimson stigma, drying and packaging, everything is done by hand. And the harvest season is short, lasting just three to four weeks in October.

“You need 150 flowers to make one gram of saffron,” says Améla du Bessy, the brains behind rooftop-grown saffron.

“This year we planted 60,000 bulbs, manually, one by one, with people from Paris. It's like magic. When you put people's hands in the soil everyone's stress goes away and everyone starts talking. That's the magic of urban farming.”

They're now into their third week of harvesting. “It's a lot of pressure, you have to pick the flowers, separate the three stigma from the petals and dry them. Within the same day the flower blooms. Otherwise it is lost.”

A tale of four sisters Améla is the eldest of the du Bessy sisters: Louise, Philippine and Berangère. They're Parisians but their family roots are in the countryside.

When they were looking for ways to bring more nature into the city and to give a bit more meaning to office life, they created Bien Elevées, an urban farming start-up dedicated to saffron.

Améla says she'd “always been fascinated” by the spice and the crocus sativus flower from which it's derived.

She had grown up with myths about the special powers the flower possessed. Like the legend of how Alexander the Great was stopped in his conquest of Kashmir because he woke up in a field surrounded by saffron flowers (when he'd gone to sleep it was all green and brown) and thought it was witchcraft.

And the fact crocus sativus flowers in October rather than in the spring like other crocuses only adds to its charm.

“It's a talented flower, a powerful culinary spice, and it's fragrant so we can use it for perfume. It also has strong anti-ageing powers so we can make cosmetic creams.”

Happier on Paris rooftops Seven years ago, du Bessy carried out an experiment and planted saffron in her parents' home in Allier in central France. There was a leftover bulb so she popped that onto her balcony in Paris. It thrived.

“Saffron is perfectly suited for urban farming. It's happier on our rooftops than it is in the soil of our parents in the centre of France. It needs very little water so we don't irrigate it, and it needs very light soil. Most of the soil in France is too heavy for it.”

The density of population is big cities is also a real plus when it comes to farming saffron.

“Saffron needs people and the city is where we have people to come and look at it, to use it, and think about what we can do with it. When you're in the countryside it's more difficult to find those people.”

In the 18th and 19th centuries, saffron was such a common crop the bulbs were fed to pigs. “We used to grow several tonnes in France per year,” says du Bessy.

But as farming became more mechanised, such a labour-intensive crop became uneconomical. Production began to wane.

Then came two world wars when the priority was having enough food to eat, never mind spicing it up.

While there's been a bit of a revival in recent years with saffron farms springing up in the Gatinois region of Normandy and in the Lot in central southern France, they remain small and artisanal.

Enthusiasm for this fragrant, powerful and long-lasting spice has clearly not waned.

Targetting 700g in 2019 When they launched last year, the sisters harvested 300g of saffron strands. They had two rooftops: one at the Institute of the Arab World (a poetic acknowledgment to saffron's roots in the Middle East), the other on top of a large supermarket in the 13th district.

“This year we have five rooftops, so we're hoping for about 700g.”

As with most urban farming, the idea is to have short supply chains: to produce and sell locally.

“That was also one of the triggers that made us start this adventure,” du Bessy explains. “We're very happy because one of our rooftops is on top of a supermarket so we can sell the saffron just below the place where we grow it. That's one of the things we love.

“And saffron is also specifically well suited for this short circuit because it's so light, the volumes are small and we can deliver it within Paris. I can carry part of last year's crop in my handbag!

"So the idea is to keep it local, so it is used by chefs or artisans near where we grow it. And sold in shops nearby.”

30 to 40 euros per gram It's no surprise saffron is nicknamed “red gold”. While there's as much counterfeit saffron in circulation as there is certified saffron, a gram of authentic threads sells for around 30 to 40 euros. And the smaller the quantity, the more expensive it is.

The price is justified by the fact every stage of production is labour-intensive. That said, you need only a pinch to spice up your paella, risotto, crème brulée or ice cream.

“With 0.1g, you can flavour 1kg of ice cream,” du Bessy explains. “It's a powerful spice. One chef told us it works out cheaper than vanilla.”

The sisters are working with chefs and perfumers. They're also developing other products using saffron such as biscuits, herbal teas and plan to use the flowers in candles and to make a dye for use on silk scarves.

Interestingly, the dye the purple flowers produce is in fact green. Another one of the mysteries surround crocus sativus.

Bringing French saffron back to life With labour costing much more in France than in other saffron-producing countries like Iran, India or the southern Mediterranean, “made in France” saffron is unlikely to be knocking Iran of its pedestal any time soon.

But that's not what the sisters are aiming for. They're committed to growing and selling local and they accept rooftop farming is limited.

“We will never have very large volume because we have small surfaces. But what I hope is that in the future we can bring French saffron back to life.

“There are lots of very small growers around France and I'd like to be able to offer them a market by buying their products and using them in some of our products so that little by little we can federate all these small growers and bring back the tradition of saffron in France.

Next year they will open a saffron farm in the city of Lyon in south-east France, famed for its strong gastronomical tradition. There's a potentially big local market there too.

This report was produced for the Spotlight on France podcast.