Ghana Citizenship Card Not For All 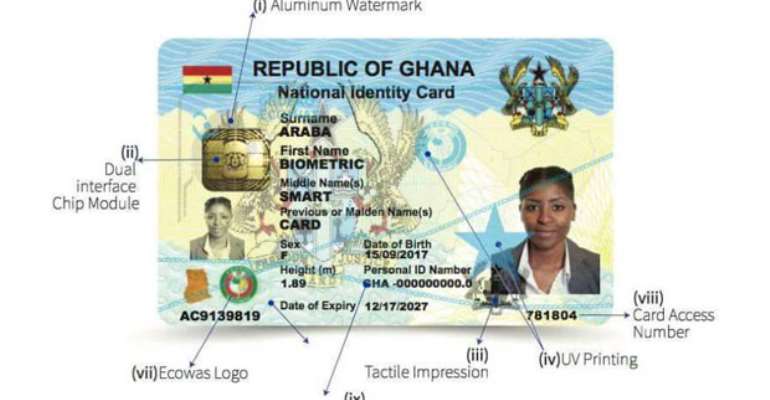 The national identification card of every country is a security document whose acquisition must be guided by the necessary law establishing it.

The importance of such cards previously non-existent in the country was brought to the front burner when the Vice-President, Dr. Mahamudu Bawumia, turned his attention to it.

As part of his digitization agenda — a sine qua non for the country's development in contemporary times — so much money has been earmarked for its implementation.

A failed attempt was made in previous years for a national identification with so much money going down the drain.

We know about the Carte d'Idente in Francophone countries and the strict rules underpinning its acquisition. A foreigner dare not attempt applying for the card if they are unqualified, the consequences of which can only be conjectured.

Providence has been kind to us; the second attempt at a national identification project is sailing smoothly.

The few hitches have been bureaucratic and the hiccups associated with new projects such as this.

The initial hue and cry about challenges encountered by persons who go to register appears to have given way to progress.

Those who qualify to be issued with the Ghana Card, as it is called, will not be denied the opportunity.

Indeed, the law establishing the scheme, as should be expected, has spelt out those who qualify to be issued with the Ghana Card.

We are dismayed, therefore, that the leadership of the Fulani in the Northern Region is claiming that some members of the ethnic group are being denied the Ghana Card.

We wish to applaud the officials who have by this development been on top of their assignments.

The Ghana Card is not meant for issuance to anybody who turns up at a registration centre. Fulanis who fail to meet the standards would not be issued with the cards. There is no ambiguity about this law. It is clearly spelt out and officials who breach these and issue the card to unqualified persons should be arrested and prosecuted.

There are Fulanis who qualify to be issued with the Ghana Card and there are even more who do not. This category of persons wandered into the country in search of pasture for their cattle.

All Ghanaians must ensure that only those who qualify are issued with the Ghana Card.  The issue of citizenship is the cause of strife in many countries. We cannot fold our arms as unqualified persons acquire our citizenship card.

The Fulani chief in Tamale must rather educate his people from outside the country's borders that they are unqualified to acquire the Ghana Card and stop complaining about a so-called agenda to deny them the security document.

Guinea has the largest population of Fulanis in West Africa. Sierra Leone, Nigeria, Mali and Burkina Faso all have large populations of Fulanis. Is the Fulani chief saying that these non-Ghanaians, because they speak Fulfulde, must be issued with the Ghana Card?  Certainly no!

The issue of citizenship in the Zongo communities is a tough one. There are many migrants who attempt to acquire the cards because they live in the midst of descendants of migrants whose grandfathers were born here.