We Predicted Rockfall On Aburi Road In 2006 – Mahama 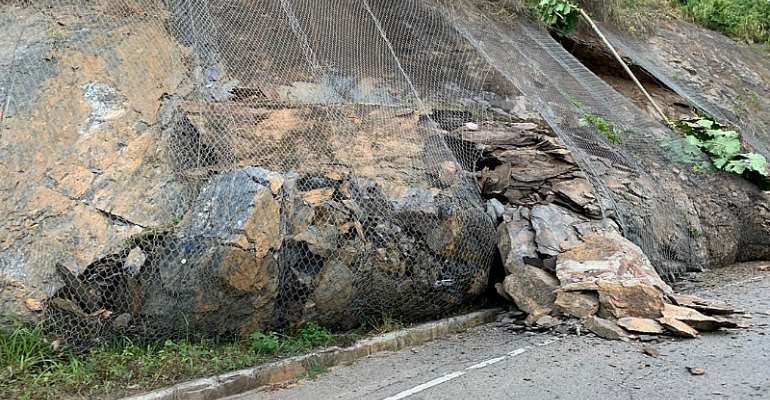 The recent rockfalls on the Accra-Aburi road was predicted in 2006, a civil engineer, Mahama Abdullai has said.

According him, after foreseeing that such rockfalls could occur in the future, proposals were sent to government to that effect.

He added that the current rockfalls could have been prevented if government had taken an action then.

“From 2007 to 2014 there was no slide. But we told government that we need to do a protection of a sort and they agreed and we submitted a rate. So we foresaw that thing in 2006 and wrote a proposal that we need to do this. I'm sure that if we had done it and the assemblies were also not giving approvals for those buildings, it wouldn't have happened,” he said.

There have been two rockfall incidents on the Aburi – Ayi Mensah road, leading to a temporary closure of the Accra bound section.

The Akuapem South District Assembly has been blamed for the rockfalls as it has been accused of issuing building permits to developers for construction projects on the Aburi Mountain.

Ing Mahama Abdulai had earlier warned of more rockfalls on the stretch if the Akuapem South Assembly continues to allow construction activities on the slope or the peak of the mountain.

According to him, such developments on the hill weaken the mountain's rock formation and allow water to penetrate cracks, causing the particles to fall.

But the Planning Officer for the Akuapem South Assembly, James Abugre had said that although they are enforcing the laws, the persons building on it are violating them.

“In controlling development as a local authority, since 2017, the assembly has stopped issuing permits to any prospective developer along that stretch. That was the first step we took. There were buildings already existing on that stretch. So some of them have permits,” he said.

“But, when we came in and realized the threats, the assembly has since 2017 not given permits to anybody to develop on that stretch. Just at our last planning meeting, we resolved that we will declare that stretch a green zone area where no artificial development will go on.”

The Ghana Highway Authority, however, says it has started works to construct a metal fence around the mountain to prevent falling rocks from dropping unto the road.