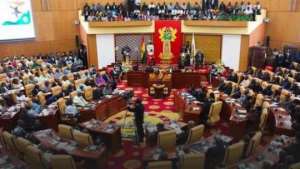 Members of Parliament were on Friday divided on the issue of decriminalizing suicide.

The House debated the matter following a statement from the Member of Parliament for Juaboso, Kwabena Mintah Akandoh and read by Dr Clement Apaak.

While some believe such behaviour should be treated as a psychological issue, others believe it must be punished as a crime.

Below are some opinions on the matter on the Floor of Parliament:

“The best sociologically researched paper on suicide is that of Duncan 1897 where he sought to establish the relationship between social factors and suicide. And in his writing, he described three types of suicide and therefore in reading about it we need to understand in each of this individual cases, what is the motivation to cause suicide and we need to understand why under Ghanaian law, suicide has been criminalized. I support that it should be decriminalized,” an MP said.

“A lot of people are trying to take their lives and for that matter, it is increasing so we should not just sweep it under carpet. If we sweep it under the carpet, it will not help our nation,” another MP suggested.

Section 57 of the Criminal Offences Act – 1960 indicates that a person who attempts to commit suicide commits a misdemeanour while anybody who abets the committing of suicide by any person is guilty of first-degree felony.

A person who attempted to commit suicide but failed may be fined, sentenced to three months imprisonment or both by a competent court of law.

Mental health Authority pushes for the decriminalization of suicide

The Mental Health Authority has been calling for laws that decriminalize suicide in Ghana.

Dr. Akwasi Osei, Chief Executive Officer of the Mental Health Authority, had said criminalization of suicide was making it difficult for people to seek help and freely confide in people their willingness to take their lives.

Dr. Osei said instead of prosecuting such persons, every person identified to have considered or attempted any form of suicide must immediately seek help from a psychiatrist or clinical psychologist. 800,000 people die from suicide yearly – Report

The Mental Health Authority had also expressed concern about the increasing cases of suicide recorded in the country.

The Authority observed that the economic situation in the country coupled with the weaknesses in our social systems contribute to the rise in suicide cases.

It therefore appealed to the government and other stakeholders to adequately resource it in providing baseline research to add effective mental health policies to revert the trend.

The Authority in a statement also referenced a World Health Organization report which stated that someone dies every 40 seconds by suicide worldwide, with 25 more people making an attempt at suicide.

The Mental Authority further stated in the statement that, “The WHO has shown that a person dies every 40 seconds by suicide worldwide, with 25 more people making an attempt at suicide. This puts the data of persons dying averagely per year to suicide at approximately 800,000 and Ghana has its fair share of this number.”

“The consequence of this phenomenon is the many more people who are left bereaved by suicide or have been close to someone who has made an attempt. Every life lost represents someone's partner, child, parent, friend or colleague. For each suicide approximately 135 people suffer intense grief or are otherwise affected. This amounts to 108 million people per year who are profoundly impacted by suicidal behaviour. These people often go through a life changing experience which when not properly dealt with, leaves such deep scars with them for the rest of their lives that impact on the quality of life of these persons and their contribution to national economic growth.”