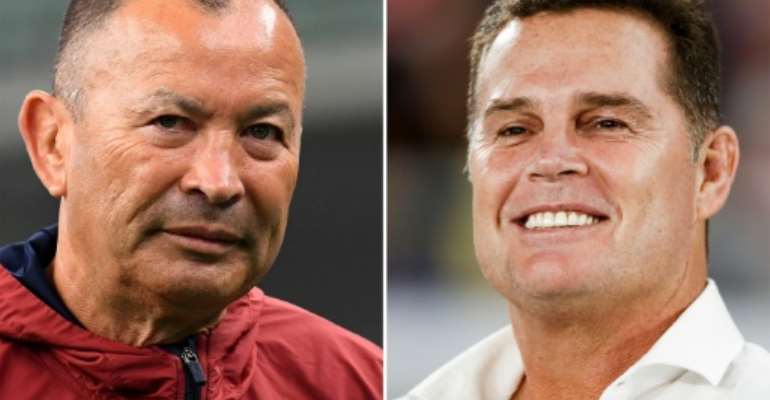 The two countries have urged their teams to inspire the nation. By Gabriel BOUYS, Odd ANDERSEN (AFP)

Both England and South Africa are hoping to bring back the Rugby World Cup to lift gloom in their respective countries as they face political uncertainty, economic hardship and of course Brexit.

Throughout the tournament, the two coaches, Eddie Jones and Rassie Erasmus, have often urged their players to inspire the nation back home and take minds off domestic problems.

In Britain, the World Cup final was supposed to be just a few days after the country left the European Union after Prime Minister Boris Johnson's "do-or-die" Brexit pledge to take the country out by October 31.

Instead, the country remains mired in political uncertainty and a snap election looms on December 12 just to dull any Christmas cheer.

Jones said the team's success had already given the country -- at least the English sections of Britain -- a sorely needed boost.

Presentation of the Rugby World Cup 2019 final between England and South Africa on Saturday November 2, at Yokohama in Japan.. By Laurence SAUBADU (AFP)

As the campaign battle for political supremacy kicks off, Johnson was quick to seize on the sporting prowess of Owen Farrell's side to wish the team luck in Yokohama.

England have also received messages from Queen Elizabeth II and Manchester City manager Pep Guardiola, who said his team of footballing superstars could "learn a lot" from the England XV.

The Queen's grandson Prince Harry is patron of the Rugby Football Union (RFU) and will attend the final in Yokohama.

His wife Meghan, who has stayed at home, revealed their five-month-old son Archie will wear a mini England jersey when they watch the final on TV.

Meanwhile, in South Africa, Finance Minster Tito Mboweni warned this week the country was "drowning in debt" as unemployment teeters on the brink of 30 percent with little prospect of immediate improvement.

South African politics is also in turmoil after a race row brought down Mmusi Maimane, the first black head of the traditionally white liberal Democratic Alliance.

Head coach Rassie Erasmus has frequently stressed that rugby is more than a game in South Africa and that his multi-racial team is aware of its power to unite the Rainbow Nation.

Asked before the quarter-final against Japan if he was worried about "spoiling the party" for the Japanese, he retorted: "We are also playing for a lot of things. In our country there are also not always things that run fluid."

"We know when we play, we represent much more than just those 23 playing on the field," said Erasmus.

The coach pointed to previous World Cup wins in 2007 and 1995 -- when President Nelson Mandela famously presented the trophy proudly wearing a Springbok shirt -- as times the country had pulled together.

"Rugby is one of the things that -- for a few minutes and sometimes a few hours, days and months if we win -- people seem to forget about their disagreements and stop disagreeing for a while, and agree."

"We are trying to win for South Africa... because our country needs a lot of things that we want to fix, and we want to help fix that."

Siya Kolisi, the first black Springbok captain, who grew up in a poor township, stressed the team are "all different South Africans from different walks of life."

"It would be huge to show that as a country, no matter where we come from, we can bind to one plan and we can achieve our goal," said Kolisi.

Come on the Springboks!. By RAJESH JANTILAL (AFP)

The Springboks also received high-level support from back home. President Cyril Ramaphosa will be in Yokohama and Archbishop Desmond Tutu said the team had "made us all feel good about ourselves."

Perhaps the most unusual pledge of support for either team came from English Golden Globe-winning actress Ruth Wilson.

"If they win, they would get a kiss from me," she said. "Every single one of them. I hope that encourages them. It might put them off!"