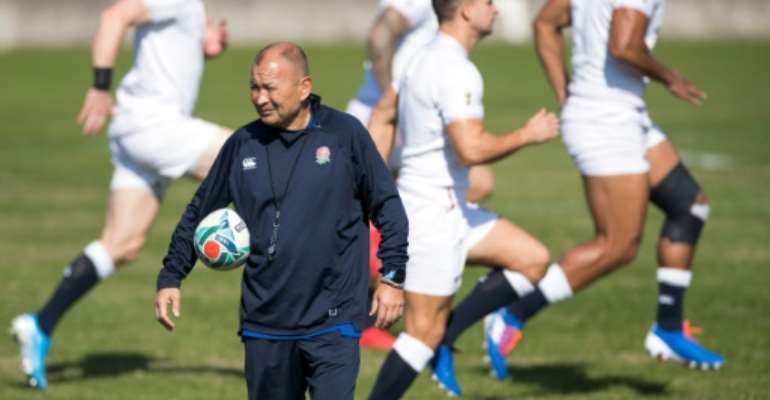 England have enjoyed a sharp rise in fortunes under Eddie Jones. By Odd ANDERSEN (AFP)

England and South Africa will collide in a Rugby World Cup final between the two most powerful teams around on Saturday as they bid to become the first side to lift the Webb Ellis Cup in Asia.

A bruising encounter is in prospect in Yokohama after England outmuscled a stunned All Blacks side in the semi-finals and the Springboks ground their way past defence-minded Wales.

If Eddie Jones's England clinch the title, they will have beaten Australia, New Zealand and South Africa on consecutive weekends -- the first World Cup treble over the southern hemisphere powerhouses.

South Africa are looking to keep up their perfect record in World Cup finals, after they lifted the trophy in front of Nelson Mandela in 1995 and beat England 15-6 in 2007.

But they will also have to make history as the first team to lose a match at the tournament and still win the trophy, after their 23-13 pool reverse to the All Blacks.

Despite being the youngest finalists in the professional era, England start as favourites after they dethroned reigning champions New Zealand 19-7 in impressive fashion.

But England may want to cast their minds back to the 2003 final, when a nerve-shredding game went to extra time before Jonny Wilkinson kicked the winning drop goal in the dying seconds against Australia.

"I just feel a lot of things are in South Africa's favour. They have an incredible bench and if it does go to the wire they could be really strong at the back-end of the game."

While much is at stake for both sides, national unity is the goal for South Africa who stand to have a black captain, Siya Kolisi, lift the trophy for the first time.

The story of Kolisi, born in a poor township to a teenage mother, is inspirational for South Africans and victory on Saturday would rival 1995, when Mandela was on hand to congratulate Boks captain Francois Pienaar in a potent symbol of reconciliation.

Kolisi, 28, is in no doubt about the importance of the game for the "Rainbow Nation".

"The president (Cyril Ramaphosa) was speaking about it in parliament, asking the whole country to wear Springbok jerseys today and, if you're in a car, to hoot at one o'clock," Kolisi said.

"We know how much rugby means to our country and what it has done in the past.

"I'm really proud of the way we have performed as a team and it would be a huge moment for us to lift the trophy. Huge for the team, huge for the country."

England haven't beaten South Africa at the World Cup since 2003, after famously losing to Jannie de Beer's five drop goals in the 1999 quarter-finals and going down twice to the Springboks in 2007.

That final 12 years ago was a tense affair, when England had a crucial try disallowed by the Television Match Official and South Africa kicked their way to the title with five penalties.

The last of the penalties was kicked by Frans Steyn, who is on the bench on Saturday and, ominously for England, has never been on the losing side in 16 World Cup games.

However, England appeared calm and confident in the build-up and they have won three of their last five Tests against Rassie Erasmus's team.

"We've had four years to prepare for this game," said Jones.

"We've got good tactical clarity about how we want to play, we're fit, we're enjoying the tournament -- the only sadness is that the tournament is going to end."