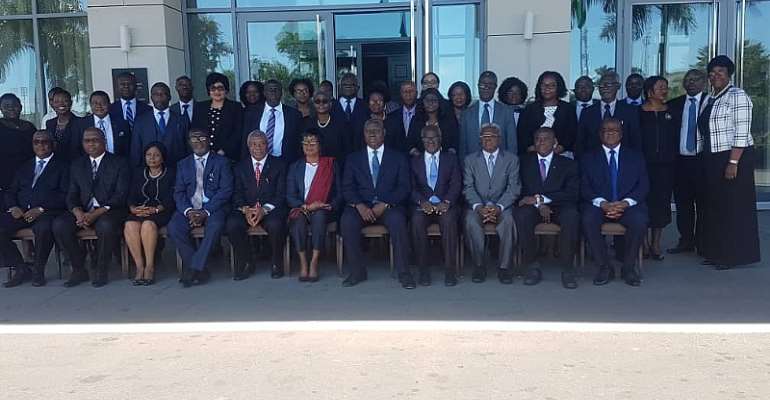 The arm of this Strategic Plan is to guide the institution for the next five years (2020-2024), drawing on the lessons and building on the strengths of the previous Plan.

Hence, in 2014, the Judiciary and the Judicial Service commenced the implementation of its first five-year Strategic Plan, a document which expired in 2018.

However, the second day of the workshop would host administrative and court staff to discuss the Plan.

The workshop would also give the opportunity for an overview of the Plan, participants would be broken into small groups to discuss various aspects of the document and propose recommendations for the fine-tuning of the Plan to be discussed at the Plenary Session.

Summary recommendations are expected at the end of discussion which would be adopted and incorporated into a workable final document that will meet the service collective aspirations and drive them to their goal of excellence and quality justice delivery.

Speaking at the opening ceremony of the event held in Accra, the Chief Justice, Sophia A. B. Akuffo advised the Judiciary and the Judicial Service to adopt the culture of continuous review of its five-year strategic plan to make it remain relevant.

According to her, the review of the institution’s plan from time to time would help them to make changes and inputs to their five years targeted plan.

Adding that, the five-year Strategic Plan would affirm efforts to provide quality, efficient and accessible Court services, continuously adopt the use of Information and Communication Technology, ensure continuous legal education, increase transparency and accountability, for the use of public resources and to be a good community partner by increasing and adopting pro-poor and community outreach programmes.

She noted that the institution for the past two decades had undergone transformation to improve its responsiveness to the citizens in accordance with its mandate under the Constitution.

"In the past, our efforts to reform were ad hoc, and not synchronized to provide a long-term plan to effectively deliver on our mandate. Reforms were thus dependent on immediate needs, a system which worked to some extent. For example, the Fast Track High Courts were established and provided with computers, audio recording and case management facilities for speedy and effective trial", she said.

She said, the current Plan, when validated, it would be built upon past successes in meeting the greater demands placed upon the service as public servants and would be the only institution with a constitutional mandate to interpret the laws without fear or favour.

Mr Tuinese Edward Amuzu, Key Expert in Rule of Law, speaking on behalf of the European Union and Accountability, Rule of Law and Anti-Corruption Programme (ARAP), said working alongside with the Judicial Reforms and Projects Department through which ARAP had collaborated to training of Judges of both the lower and superior Courts, including Judges of the Court of Appeal has been very productive.

According to him, ARAP has been working on the electronic Legal Web Library which would become reality soon.

He said as ARAP comes to an end in January 2021, they were hoping that the gains of the ARAP collaboration would be sustained.

"Sustainability of the PRODUCTS of ARAP is critical is we are to be assured of any meaningful and enduring result from the collaboration with the Judiciary and the Judicial Service. We know that this Strategic Plan can be the NEXT STEP to a NEW WAY FORWARD", he added.