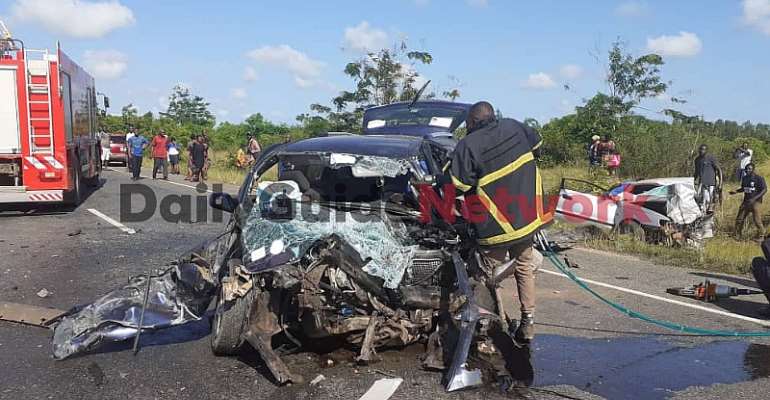 Four persons are reported dead while three others have sustained various degrees of injuries in a vehicular accident on the Adidome – Sogakofe Road in the Central Tongu District of the Volta Region.

The accident which occurred at about 8:40am on Friday, November 1, 2019 left the two vehicles damaged beyond repairs.

An eyewitness, Dennis Kpoha, who recounted the incident to DGN Online, said the accident was caused by a sack which fell off another vehicle.

The vehicle which had the sack was not involved in the accident.

He said “the accident was caused by this sack (pointing to an off-white sack).”

He explained that the sack had fallen of the said vehicle which drew the attention of the Ho – Sogakofe bound Pontiac Vibe vehicle with registration number, GE-5684-16.

He said the Pontiac driver slowed on nearing the sack and veered off its lane (Adidome-Sogakofe side) and packed on the opposite lane (Sogakofe-Adidome side) to pick the sack.

The other vehicle, Toyota Carina with registration number, GW- 5171-Z, which was moving in its lane on the Sogokefe-Adidome side crashed into the Pontiac which is believed to have wrongly packed on that side of the road.

The Toyota vehicle fell into a nearby bush.

The drivers of the two vehicles died instantly together with two other passengers.

Dennis says two of the injured had been rushed to a nearby hospital.

As at the time DGN Online got to the scene, a rescue team from the Ghana Fire Service had arrived to help retrieve the bodies from the mangled vehicles.

The accident attracted lots of onlookers; several of whom were wailing while others assisted the rescue team to retrieve the corpses from the mangled vehicles.