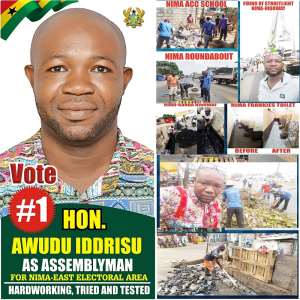 The Assembly Member for the Nima East Electoral Area, in the Greater Accra Region, Hon. Awudu Iddrisu has described assembly work as a training ground for would-be community and political leaders.

Hon. Awudu, who is seeking a second term in the forthcoming December 2019 Assembly elections, said Assembly work is not lucrative as perceived by a lot of people.

The incumbent Nima East Assembly Member was speaking to this reporter in Accra on his campaign priorities when he made the observations and added that Assembly Members don't receive salaries but only sitting allowance which he further described as nothing to write home about.

"It is about the zeal, dedication and passion to serve your community at the grassroots level and not about making money."

Hon. Awudu who mentioned that his campaign prioritises among other things on education, sanitation and security, adding that assembly work has much to do with lobbying for projects.

He mentioned that he has lobbied for a lot of projects and initiatives for the community amongst which he mentioned the fixing of street lights on the Nima Highway and other parts of the Electoral Area.

The fixing of street lights has helped in making movements of people, goods and services smooth without fear, especially during the nights and early mornings.

He was hopeful that he would be retained into office by the good people of the electoral area based on his track record during his first term. "The people need me to continue the good work that I have been doing for them in the areas of education, sanitation, security and other social activities."

The incumbent Assemblyman noted that alot had been done for the people recounting that security-wise, Nima is now a safe place for people from all walks of life to transact their daily businesses without any fear of attacks.

He was quick to add that the people of Nima are good people unlike what is been speculated in the section of the public that Nima people are criminals, uneducated and associated with all social vices.

In the area of sanitation, hon. Awudu disclosed that there had been periodic cleanup exercises organised in the area to get the community rid of filth and diseases.

He promised to continue the good work when given the nod come December 17, 2019 assembly elections.

"I organised and led clean up exercises at the Nima Cluster of Schools, Nima Round About, Market and other parts of the area in our bid the get rid of filth and sickness and to also make our environment looks clean and healthy for both indigenes and visitors".

Education he said has and will continue to be his passion. "I have lobbied for scholarships to be given to indigenes of the area regardless of one's political affiliation."

He also disclosed that he has on many occasions liased with headteachers of schools within the community to find amicable ways of settling the children's school fees particularly for the poor and needy in the society.

"Through the newly introduced double-track SHS system, I have also on many occasions lobbied for wards of poor parents who have been placed in schools in other far places outside Accra to be brought back to to Accra to further their studies."

He continued, "This, I do in collaboration with the Ministry of Education and the Ayawaso East Municipal Assembly to help ease burdens of our poor and needy parents who cannot afford costs of attending to their wards needs in faraway educational institutes."

The door he said is open for all to contest but it is the electorates who will decide and "I am very confident that I would be given the nod again by the electorates to serve them for second time."

"Nima, is our community and that it is we the indigenes that have to strive hard and make Nima the best, peaceful, clean and hustle free area for the people and businesses."

He stressed, "we can do this by creating an enabling environment for businesses to thrive regardless of one's political and religious affiliations, which will fetch incomes for our people and community at large."