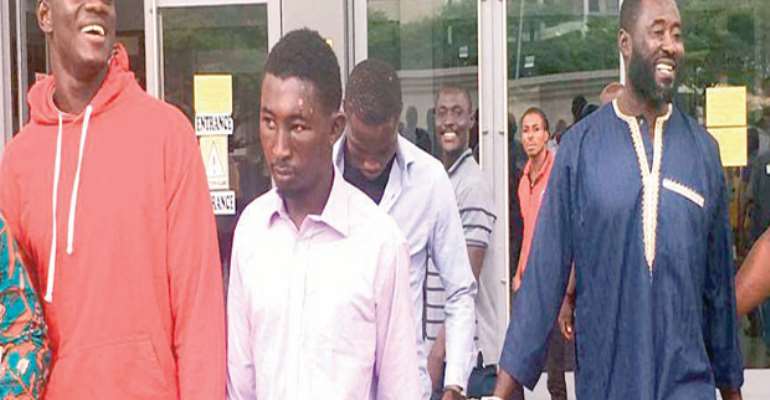 An Accra High Court has ordered the Office of the Attorney General (AG) to file all documents it intends to rely on in the trial of four persons arrested for allegedly kidnapping two Canadians in Kumasi, the Ashanti Regional capital.

The documents to be filed, according to the court presided over by Justice George Buadi, must include witness statements and the list of all persons the state would call to testify in the trial as witnesses.

According to the court, state prosecutors have up to November 14, 2019 to file all the documents in court and also serve them on the accused persons and their lawyers.

Four out of the eight persons who were initially arrested in connection with the kidnapping were recently discharged, as the prosecution decided to drop all charges against them after reviewing the investigations.

However, Sampson Aghalor, 27, computer engineer; Elvis Ojiyorwe, 27, businessman, and Jeff Omarsa, 28, Tiller – all Nigerians and their Ghanaian counterpart, Yussif Yakubu, 28, were kept for their roles in the kidnapping.

Among the four who were discharged by the court is Seidu Abubakari, aka Nba, who was initially suspected to be the ring leader of the kidnapping gang.

The suspects who are currently on trial have already pleaded not guilty to the charges.

It appears the case would have to be put before a new court or a different judge taking over as the trial judge, as Justice Buadi has indicated he may not continue with the case.

Although he did not give any specific reasons, he stated that his mandate over the court where the case is ends on November 29, 2019.

He, however, said that in the interest of a speedy trial, he would give 'further directions' to the prosecution regarding the legal processes of disclosing documents, paving way for the new judge to take over from the case management stage.

Justice Buadi subsequently ordered the state represented by Winifred Sarpong, an Assistant State Attorney, to file all document from the side of the prosecution documents on or before November 14.

The accused persons are to remain in prison custody while the case was adjourned to November 21, 2019.

The accused persons through their lawyer yesterday pleaded with the court to order the investigator to release some monies which were taken from them following their arrests.

Yaw Dankwa, one of the defence counsel, told the court that Sampson Aghalor had GH¢890 on him at the time of his arrest but only GH¢250 had been released to him.

Other accused persons also said they were only given part of the total amount seized from them upon their arrests and pleaded with the court to help them to get the money back.

Justice Buadi, however, said the security agencies could be keeping the money as exhibits and, therefore, was not in a position to make such orders until the investigator confirms otherwise.

The investigators have revealed some harrowing information about how the four accused persons strategized and executed their plans.

Sampson Aghalor and Yussif Yakubu struck acquaintance sometime in March 2019 after the latter had supplied him with a pistol and 40 rounds of ammunition at a cost of GH¢3,700.

She said Sampson later discussed his plans of kidnapping a white man in Ghana in order to obtain what he termed 'serial numbers' from him.

Subsequent to that, he went back to Nigeria and sold his idea to Jeff Omarsa and Elvis Ojiyorwe, both of whom decided to follow him to Ghana to carry it out.

She said in June, the four accused persons armed with pistols rented a vehicle and went to town for a shooting practice after which they went in search of white people to kidnap.

They met the two Canadian ladies, Lauren Tilley and Bailey Chitty, who were in an Uber vehicle and kidnapped them just as they alighted from the vehicle amidst shootings.

The two ladies were taken to an uncompleted building at Amoam Achiase in the Kwabre District where they were blindfolded, tied and threatened with knives and guns.

The accused persons then demanded a ransom of $800,000 from the relatives of the victims and threatened to kill them if the money was not sent to them.

They were said to have also touched the ladies inappropriately and threatened to have sex with them.

In a bid to get the parents to pay the ransom, the accused persons smeared the victims with the blood of a fowl, took pictures of them and forwarded them to their parents.