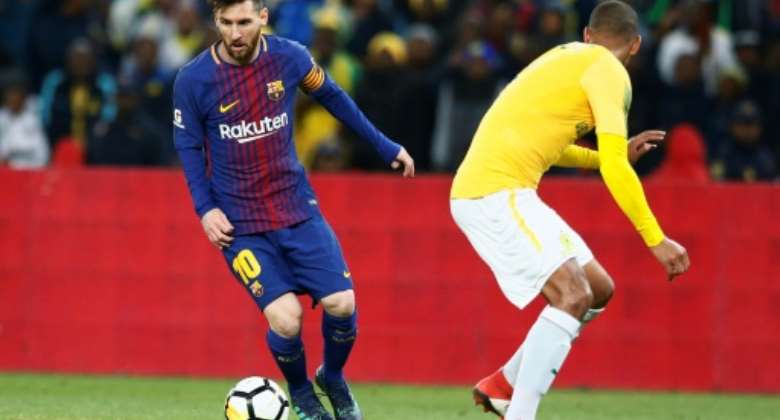 South Africans in the sprawling township of Soweto are gearing up for a major sporting occasion this Saturday -- but it is not the 2019 Rugby World Cup final between the Springboks and England.

Centre of attention for most residents will be the latest episode in a 49-year rivalry between the most popular football clubs in the republic, Kaizer Chiefs and Orlando Pirates.

Although both clubs are based in Soweto, their South African League Cup quarter-final will be staged 600 kilometres (350 miles) away in Indian Ocean port city of Durban.

The derbies are usually played in front of sell-out 90,000 crowds at Soccer City, the Soweto stadium where Spain beat the Netherlands to win the 2010 World Cup.

But the Soweto Marathon is being run this Sunday and a number of road closures close to the stadium prevented the Africa's biggest club derby being played there.

"I'll be watching Pirates and Chiefs (and) hoping for a South African victory in the rugby," football coach and chairman of the Pass youth academy Oscar Mohohlo told AFP.

The academy trains boys and girls every day on barren land in a suburb of the historic township near Johannesburg.

Academy member Nomvula Nkabinde said she would only be watching the football as the aggression of rugby turns her off.

Her friend Mankabo Dyemsi admitted that she "didn't even know there was a Rugby World Cup going on".

There are some Springboks supporters in Soweto, however.

"Because it's the final and the Bokke (Springboks) are there, I'll definitely be watching it," said another academy member, Makhensa Sono.

"Soccer is easy, it doesn't have complicated things -- you just kick the ball into the net and it's a goal ... unlike rugby."

"I've watched maybe half of one or two World Cup games, but not full matches. I'm not a rugby fan because I don't understand the game.

"But I just watch to enjoy because I'm a sportsman", added Sono.

Zibusisio Ralefala welcomed the Springboks becoming a multiracial team after almost a century of white-only selections with blacks forced to play among themselves.

"Rugby has changed and is more diverse -- it's blacks and whites now and no longer just whites," he said.

Mohohlo says rugby has remained largely inaccessible to youngsters in Soweto because there is little infrastructure and "no one tells them about the Bulls or the Lions (Super Rugby teams).

"It's Chiefs and Pirates here, so they grow up loving soccer rather than rugby. To play a game, you need to love it first."

Sowetans who follow rugby received a boost this week when the national broadcaster, SABC, said it would screen the Rugby World Cup final in Japan.

The rugby title decider begins at 1100 local time (0900 GMT), four hours before the cup tie between Chiefs and Pirates kicks off.