From Mandela to Kolisi, Springboks' long journey to racial transformation 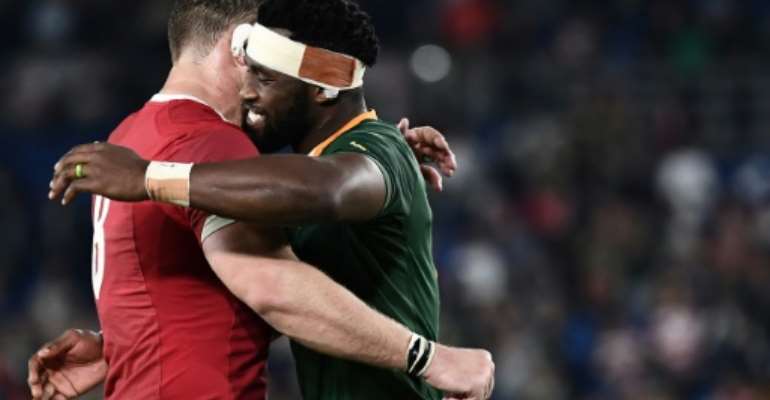 The racial transformation of the Springboks into a team where six black players, including skipper Siya Kolisi, will face England in Saturday's Rugby World Cup final has been tortuous and hard-won.

There have been highs like the elevation last year of Kolisi to be the first black Test captain of a South African national team that for 90 years chose only whites.

There have also been lows, most recently when star lock Eben Etzebeth was accused of assaulting and racially abusing a homeless black man before flying to Japan for the World Cup.

Etzebeth, who captained the Springboks two seasons ago after first choice Warren Whiteley was injured, denies the allegations.

Springboks coach Rassie Erasmus is adamant that there are no racists in his charge, telling AFP that "I would not tolerate racism in my squad.

"I can guarantee you that this team is a nice, close-knit one, and there will never be something like that (racism)."

But the coach had to turn firefighter after celebrations following a mammoth pool win over 14-man Italy triggered social media fury.

Six white reserves excluded black starter Makazole Mapimpi from a huddle and the immediate reaction on social media was that the winger had been racially shunned.

In fact, the 'bomb squad', as the reserves label themselves, always celebrate separately from the starting players.

Mapimpi, a contender for leading try-scorer in this World Cup with five, backed the reserves on Twitter only to be branded a "sell-out".

Twitter is the preferred battlefield when black and white South Africans go to war over the Springboks, who are seeking a World Cup hat-trick following 1995 and 2007 triumphs.

When Kolisi suggested this year that deceased former state president Nelson Mandela would not have backed Springbok racial quotas, he was also slammed for being a "sell-out".

The 27-year-old, born into poverty in an eastern Cape township, does not enjoy being called the first black Test captain of the Springboks.

"That is not a description I find natural," he admitted to AFP. "I'm privileged to captain a team that represents all South Africans."

Kolisi was born during the death throes of apartheid in 1991 and three years later multiracial elections ushered long-time political prisoner Mandela to power.

Mandela, who loved boxing, later played a key role in defusing demands from elements within the ruling African National Congress party that the emblem of a leaping Springbok be dumped.

The political icon reasoned that the Springboks were dear to South African whites and he wanted to foster national unity in the aftermath of the divisive apartheid era.

He arrived at the 1995 World Cup final in Johannesburg wearing a replica of the shirt of skipper Francois Pienaar and a mainly white crowd chanted "Nelson, Nelson, Nelson".

Mandela later presented the trophy to Pienaar after a dramatic extra-time triumph over arch-rivals New Zealand, and all seemed well with South African rugby.

As blacks who previously hated the Springboks, seeing them as a symbol of apartheid, danced in the streets around Ellis Park, hopes were high that a new, multiracial team would be born.

Winger Chester Williams, who died recently of a heart attack, was the lone black in the 1995 winning team, an unacceptable situation given only 10 percent of the population was white.

But when the Springboks conquered the world again in France 12 years later, there were just two black starters, wingers JP Pietersen and Bryan Habana.

Ahead of the 2003 World Cup, where the Springboks made a timid quarter-finals exit, forward Geo Cronje was kicked out of the squad for refusing to share a room with a black team-mate.

Cronje represented a group who longed for the old days when whites represented the country and blacks played among themselves without any international recognition.

Leading rugby analyst Mark Keohane quit as media manager of the 2003 squad soon after the Cronje scandal, describing his time with them as "an awful experience".

Keohane believes the 2019 World Cup Springboks are the most united he has observed with players respectful of differing cultures and races.

Ken Agyapong is only brave on NET2 TV but actually a coward ...
27 minutes ago