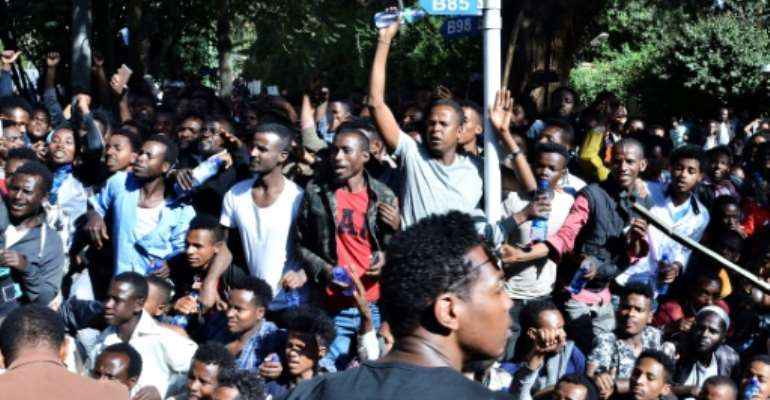 The unrest was triggered when media mogul Jawar Mohammed, an Oromo activist, claimed that security forces had plotted an attack against him. Shown here are supporters at a rally outside his home. By STRINGER (AFP/File)

Temesgen was shot by security forces, Kidane was brutally attacked by nationalists from his own ethnic group, and still others were targeted for their religion.

From their hospital beds in Adama in the centre of Ethiopia, their stories bear witness to a chaotic wave of violence last week that started as protests against Prime Minister Abiy Ahmed but devolved into clashes fuelled by ethnicity and religion.

Seventy-eight people died across the Oromia region -- heartland of the Oromo ethnic group -- in violence that has taken the shine off Abiy's Nobel Peace Prize and spotlighted challenges that jeopardise his standing ahead of elections planned for next May.

At Adama Hospital, nearly 200 people sought treatment and 16 died -- numbers hospital staff said were unprecedented as they described scrambling to find beds and supplies for patients who had been shot and beaten as protests erupted last Wednesday.

"Most of the people were under stress, even including the staff, because this was sudden and the first time like this in this town," Dr Desalegn Fekadu, a surgeon, told AFP.

"How can shooting at people like that become an appropriate response?" asked 17-year-old Temesgen Ababa. By - (AFP)

In Adama, a city of 300,000 southeast of the capital, Addis Ababa, the details of individual attacks illustrate how the violence unfolded, who was targeted and why signs point to more trouble down the road.

"Adama is a melting pot of Ethiopian ethnic and religious groups, with many different groups, so these incidents of violence rooted in religion and ethnicity can be very dangerous," said Fisseha Tekle, a researcher with Amnesty International.

"It can be a premonition for mass atrocities."

The trigger for the unrest was a Facebook post by Jawar Mohammed, an activist from Ethiopia's largest ethnic group, the Oromos, claiming that security forces had tried to orchestrate an attack against him.

Jawar, a polarising media mogul, helped fellow Oromo Abiy come to power last year, but he has recently criticised some of the premier's policies.

"Most of the people were under stress, because this was sudden and the first time like this in this town," said Dr. Desalegn Fekadu, a surgeon. By - (AFP)

Officials denied Jawar's claim, but that did not stop hundreds of his followers from gathering outside his home in Addis Ababa and in towns and cities across Oromia, including Adama.

Temesgen Ababa, 17, told AFP he was passing one such crowd when security forces opened fire, hitting an eight-year-old boy.

When Temesgen rushed over to help the boy, he too was shot in the chest.

"How can shooting at people like that become an appropriate response?" Temesgen asked from his hospital bed, as blood from his wound drained through a tube into a plastic bottle on the floor.

The Ethiopian Human Rights Commission estimates that 10 of those killed last week died at the hands of security forces.

That would mean that most of the killings were committed by those who profited from the instability to carry out ethnically and religiously motivated attacks.

Biruk Teshome has spent the past week pacing the corridors of Adama Hospital fretting about two relatives -- a brother and a cousin -- caught up in just that type of violence.

The two tuk-tuk drivers were attacked by bands of young Oromo nationalists who first asked if they spoke the Afaan Oromo language.

When they said they did not, the men stabbed them and beat them with sticks and stones, leaving them unconscious on the roadside with bruises and gashes on their faces and arms.

Biruk noted that while his cousin is from the Amhara ethnic group, his brother is half-Oromo and speaks Afaan Oromo poorly.

Both of his relatives are expected to live, but Biruk said he is concerned about the future.

He accused security forces of standing idle while militant Oromo nationalists did as they pleased.

"We didn't have any protection from them," he said.

A similar complaint has been voiced by leaders of the Ethiopian Orthodox Church, whose adherents make up 40 percent of Ethiopia's population of 110 million, but which is widely associated with the Amharas.

Attacks on churches and at least one mosque were also reported during the clashes.

Nationalist Amharas and Oromos have a history of enmity in the diverse country where ethnicity and religion are often intertwined.

Hospital officials said many of the patients are Oromos, meaning that non-Oromos were not the only targets.

At the height of the violence, 23-year-old Kidane Tolosa was assaulted by a gang of fellow young Oromos who beat him with stones and slashed open his lower abdomen, causing him to lose so much blood he nearly died.

Kidane Tolosa, 23, was assaulted by a gang of fellow Oromos, maybe because he did not take part in the violence. By - (AFP)

Recovering at Adama Hospital, Kidane told AFP he was not sure why he was attacked, but relatives speculated that it was because he did not participate in the violence.

Biruk said he knew of other Oromos who were attacked for that reason.

"If they find you speak (Afaan Oromo), they invite you to join with them," he said, referring to militant Oromo nationalists.

"If you say no, they will attack you as well. If you are Oromo, you must protest, you must enjoy."

It is a worrying claim, but Desalegn, the surgeon, said he is hopes the events of last week will not become a pattern.

"Only God knows, but... I don't want to see such casualties again."