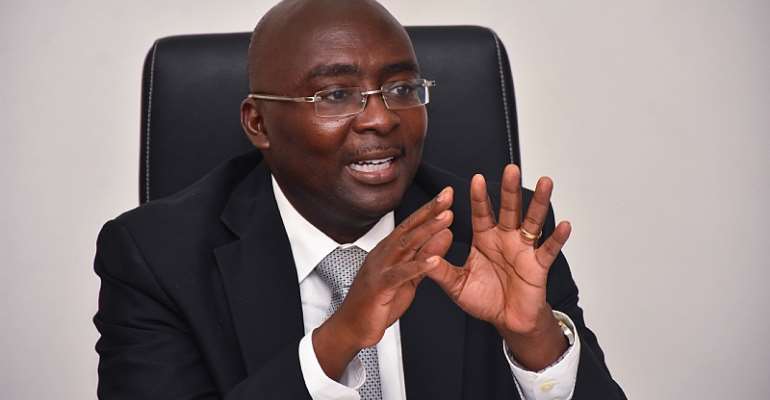 Whenever Vice President Dr. Mahamudu Bawumia speaks—either on the campaign trail or talking about pressing national issues—one gets a clear picture of why Nana Akufo-Addo decided to pick the former American professor, banker, economist/technocrat from Ghana’s Central Bank to become the number two man at the nation’s presidency. On the job as the vice president, Dr. Bawumia has demonstrated unparalleled skills in sound economic management that has resulted in relative progress in the economy, compared to the abysmal state in which the previous Mahama-led government left behind in its inept tracks.

From the very first day then presidential candidate Nana Addo Danquah selected him to become his running mate, Dr. Bawumia had become and still is a razor-sharp knife in the softie flesh of the Mahama-seized National Democratic Congress(NDC). As of now, a common sneeze or cough from the current vice president results in the NDC leadership catching severe cold or hay fever. The fact is, the present Ghana’s second-in-command is way ahead of his rivals in the Mahama-takeover NDC in terms of in-depth knowledge and comprehension of the dynamics of the micro, mezzo, or macroeconomic issues.

Not only is Dr. Bawumia the leading architect of Akufo-Addo-led ruling NPP’s far-reaching socioeconomic intervention programs that are slowly but surely opening up the economy and beginning to unleash the innovative and entrepreneurial energies/spirits of many Ghanaians, but also this vice president is a consummate communicator.

His presentations are simple and digestible, free from big English vocabularies in a veiled attempt to prove to his listeners that he is Western-trained scholar. Listening to him speak on countless occasions in public arena, one’s unreserved impression formed about Alhaji Bawumia is that he is highly intelligent, savvy policy analyst, articulate, coherent, sophisticated, and above all, he clearly apprehends communication as information transfer and more importantly as strategic control/situational.

This explains why whenever he speaks trying to break down complex economic concepts, he expresses them in such a way that millions of Ghanaians understand him in laypersons’ terms, except the cynics at the Mahama’s NDC camp. Any fair-minded Ghanaian listening to many of the NDC’s raving responses to Vice President Bawumia’s compelling economic arguments/assumptions of his government since they took office, evidently expose a main opposition party miserably in need of 21st century economists and committed policy wonks.

How often do reasonable-minded people see ex-President Mahama and his cheerleaders making any spellbinding socioeconomic argument that stands in stark contrast to Nana Addo-Bawumia’s current economic programs? Recently, Dr. Bawumia was seen speaking at the one-year anniversary of the Nation Builders Corps (NABCO), where the vice president eloquently extolled the genuine achievements of the ruling NPP for the relatively three short years their government has been in power. As usual, while Dr. Bawumia made persuasive case regarding Nana Akufo-Addo-led administration accomplishments, the NDC’s minority leader in parliament Mr. Haruna Iddrisu came out with some fable and uncoordinated rebuttals that resemble high school debating rehearsals. The theme of the MP’s response was that the gradual progress happening under the current government is a culmination of former President Mahama’s long-term policies he puts place before leaving Ghana in quandary.

Certainly, the main opposition party’s desperate attempt to offer countervailing policy analysis, to what the nimble vice president laid out in terms of the present regime’s successful performance, was a mere window dressing designed to say to Ghanaians “hey, look we’re viable main opposition capable of keeping the government in check.” Remember Dr. Bawumia-led ruling NPP economic team’s data-centered propositions/solutions to the nation’s development have turned out to be occasions for Mahama-funded NDC to engage in their usual facts-twisting and propaganda tactics. Sadly, today’s NDC lacks profound grasps of the intricacies associated with contemporary socioeconomic policy formulation as well as policy implementation. When the minority leader from Tamale South constituency Hon. Iddrisu tried to respond to Alhaji Bawumia who had spelled out litanies of NPP’s attainments in power, the least Mahama-led NDC’s propaganda/economic/communication team could do was to start calling the vice president all kinds of unpleasant names which further exposed Ghana’s major opposition party’s pettiness.

To say that NDC is not a serious opposition party as regards its attitude toward sound and people-centered policies is almost similar to hauling a heap of sand redundantly to the beach. Honestly, ex-President Mahama and his followers’ concerted effort to come back to power is to find another sophisticated way to milk Ghana dry as it was the case before the party was booted out of office in 2016. Thus, one of the means via which Mahama-hijacked NDC is employing to try to sneak back into power borders on trivializing every policy the current government may come up with, in addition to spreading fears where fears do not actually exist in order to keep all the vulnerable Ghanaians in a state of perpetual panic and rumors of lingering instability.

Unlike Nana Addo that some of us have seen and met up close on speaking events on several occasions long before he became president, Dr. Bawumia’s case is different. Nonetheless, one does not need to see or meet the current vice president on personal basis to know he has the knack for rendering complicated socioeconomic concepts into the levels that are within layperson’s comprehension. Again, whenever Dr. Bawumia speaks, his communication prowess radiates through his coherent messages and that drives ex-present Mahama and his “fat cats” at the NDC, angry.

It’s not surprising VP Dr. B., used to teach at an American university because as a foreigner/professor with non-American accent, he has to have excellent communication skills to be able to convey academic deliverables effectively in and outside classroom. Apparently, this is one of the NDC’s campaign niggling nightmares: how to contain or keep up with President Akufo-Addo’s economic team led by his political protégé Dr. Bawumia whose critical thinking aptitude is matchless when paired against his critics within the NDC group.

Now, a word of caution/advice: as the 2020 general elections gather momentum, and the opposition parties led by Mahama’s NDC, especially, starts firing all its campaign cylinders, Ghanaians must begin cleaning their ears really good. Because the country is about to hear unprecedented insult-filled or name-calling such as “Bawuliar, liar, Tamale economists/Milton Keynes” and many other derisive names just to make non-serious people laugh in that this brand of NDC has nothing serious to offer Ghana except comic relief and outlines of policy alternatives based on sparkling generalities. Meanwhile whenever Vice President Bawumia speaks and even stammers in the process, Mahama’s NDC shivers uncontrollably. Does anyone wonders why this NDC leadership is so fixated on Nana Addo’s number two man?

Bernard Asubonteng resides in the US; he is Ph.D. candidate for public/foreign policy