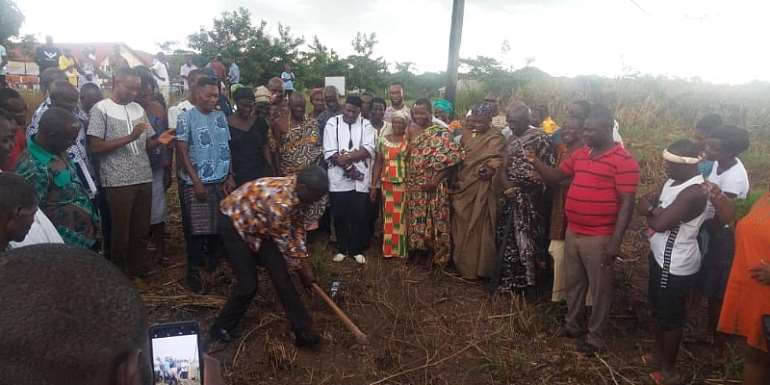 The District Chief Executive for the Akatsi North District, Dr. Prince Sodoke Amuzu and some traditional leaders from the Ave Council of Chiefs, have cut sod for the construction of an ultra-modern market facility for the District -a project that is to be funded by the Assembly's share of government's One Million Dollar per Constituency initiative.

Speaking at the sod cutting event in Ave Dakpa, on Friday 25th October, Dr. Amuzu said "the market would serve the several farming communities within the district, boost economic activities and help the District Assembly in increasing its Internally Generated Funds (IGF)".

He revealed that other smaller markets within the enclave would continue to operate in serving residents, while the central market would have a day dedicated to it for the entire district.

With an estimated cost of GH¢ 800,000 the market would include a 20-unit seater open market sheds, 15-unit lockable stores, a slaughter house, lorry station, and a 2-unit kindergarten school block with ancillary facilities.

The project, to be executed by Vislah Construction Works Limited, would be served by a ten-seater solar powered water closet toilet facility, and a mechanised borehole.

*Meet the Press highlights*
Following the sod cutting event, the DCE proceeded with the maiden ''Meet the Press" series touching on a number of projects initiated by the NPP government since assuming office in 2017.

In the area of Education, he mentioned that the district has made significant strides in terms of the provision of school infrastructure and other learning materials to schools in the district, several of which have been completed and or at the completion stage.

a 3-unit classroom block with ancillary facilities at Nudowukorpe, out of a total of 27 different school facility projects.

According to the DCE, the district has seen a significant improvement in water and sanitation issues with a number of projects initiated in this regard.

*Agriculture*
Under government's Planting for Food and Jobs policy, the Akatsi North District has distributed 400 bags of 50kg NPK and 400 bags of 25kg Urea fertilizers to farmers across the district free of charge, including the distribution of 1,200 litres of 'eduane pa' organic fertilizers for farmers.

The assembly has also distributed a total of 50,000 seedlings of cashew and 2,520 seedlings of oil palm to farmers within the between 2018-19 under the Planting for Export and Rural Development policy.

According to the DCE, the Assembly has began putting up structures for

He noted that the three programs have contributed to a boost in food production and creation of jobs in the district.

He tauted efforts made by the Assembly in the health sector pointing to the construction of CHIPS compounds at Zemu, Agormor and some other areas in the District.