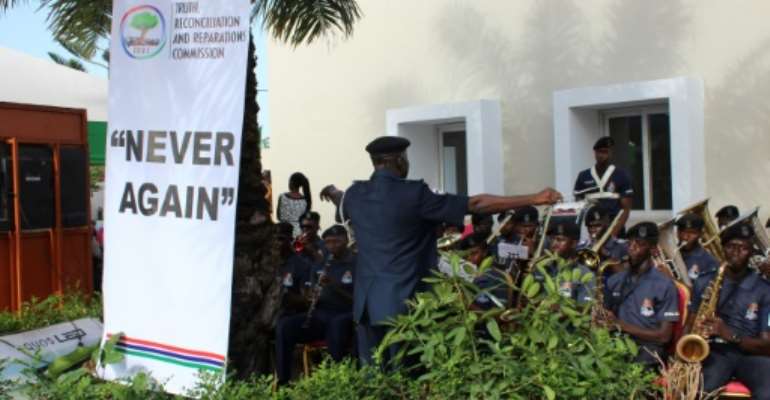 This picture shows a banner reading "Never Again" is seen as a police band performs during the Truth and Reconciliation and Reparation Commission, at the Dune's Resort, in Kotu, near Bajul, on October 15, 2018. By Claire BARGELES (AFP/File)

A Gambian former beauty queen on Thursday accused former President Yahya Jammeh of raping her to punish her for rejecting his marriage proposal, in evidence to the country's truth and reconciliation commission.

"There were words like 'who do you think you are?', that he is the president and that he gets any woman that he wants," Jallow told Gambia's Truth, Reconciliation and Reparations Commission (TRRC).

Jammeh fled the country in January 2017 after losing presidential elections and initially refusing to step down.

He had come to power in a bloodless coup in July 1994 and was repeatedly re-elected in disputed circumstances until being defeated in December 2016 by the relatively unknown Adama Barrow.

After other West African states intervened, he fled into exile in the central African state of Equatorial Guinea.

The TRRC was set up to review abuses under Jammeh.