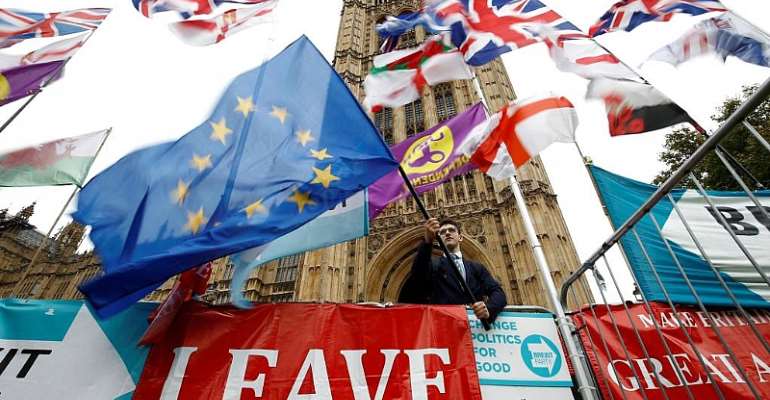 UK Prime Minister Boris Johnson has blamed opposition leader Jeremy Corbyn for preventing him from delivering Brexit, as both men began campaigning for December elections. Johnson risks a backlash for failing to keep his "do or die" pledge to take Britain out of the European Union on 31 October.

"Today should have been the day that Brexit was delivered and we finally left the EU," the Conservative leader said in a statement.

"Despite the great new deal I agreed with the EU, Jeremy Corbyn refused to allow that to happen – insisting upon more dither, more delay and more uncertainty for families and business."

Pro-EU campaigners breathed a sigh of relief that Britain had been given a stay of execution to avoid a Hallowe'en Brexit nightmare, after stark predictions of chaos and disruption.

Johnson had vowed he would rather be "dead in a ditch" than tolerate another extension to the tortuous process, which began in 2016 after a knife-edge public referendum.

But he was forced to ask the EU to delay Brexit until January 31 after MPs in the House of Commons refused to approve the withdrawal terms he had struck with Brussels.

Labour leader Corbyn laid the blame squarely at Johnson's door. "The failure to do so is his and his alone," he wrote on Twitter.

The anti-Brexit popular Mirror warns of “five terrible things that'll definitely happen as Britain explodes tonight,” when the Brexit deadline passes. The predictions include civil unrest and the end of the Tory party.

The Sun has Boris vow that the Brexit deal is “Oven Ready” as he kicks off his election campaign. The more serious, but pro-Brexit Daily Telegraph focuses on Corbyn "confirming a second referendum,” and his pledge to “nationalise rail, mail and water – and sort Brexit within 6 months.”

Campaigns kick off
The fourth new Brexit deadline of January 31 will inevitably loom large in campaigning for what is the third general election in four years and the first in December since 1923.

But Corbyn is seeking to shift the debate onto more domestic subjects such as health and social care, and education.

More than three years after the referendum that has increasingly divided Britain, Labour remains split over Brexit.

Its promise of a new public vote within six months of winning an election has not been matched with details on how it would campaign.

Born-to-rule
Ahead of an election rally in London, veteran socialist Corbyn attacked Johnson's "born-to-rule Conservatives" who he said were interested only in protecting "the privileged few".

"This election is a once-in-a-generation chance to transform our country, take on the vested interests holding people back, and ensure that no community is left behind," he said.

Business leaders have claimed Labour's renationalisation plans of certain key sectors, including the railways, would cost at least 227 billion euros.

Johnson on Wednesday called the plan "pointless" and said it could trigger "economic catastrophe", pledging himself to "invest massively" in the state-run health service and education.

A National Institute of Economic and Social Research study, published on Wednesday, however, suggested Johnson's Brexit deal could leave Britain £70 billion worse off in 10 years.