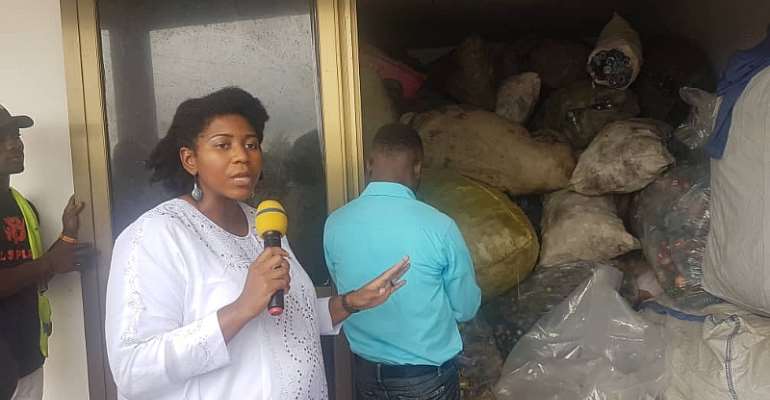 Environment360 has launched the first PET Take Back Center in Accra. The center, which is based at Madina Ritz Junction in Accra, offers a financial incentive for waste pickers that bring in their plastic bottles, also known as PET, for recycling.

The Take Back Center is supported by the German Federal State of North-Rhine Westphalia and GIZ is part of a larger pilot project to reduce the amount of plastic litter in Ghana by developing the capacity of informal sector waste workers and youth.

Since the Take Back Center has opened in July, it has collected more than 15 metric tons of PET and injected more GH¢12,000 into the pockets of waste pickers in the Madina and Adenta Area.

Founder and Executive Director of Environment360, Mrs. Cordie Aziz believes, the take-back model has the potential to be operated successfully throughout various parts of Accra with the cooperation from key stakeholders.

"During the past five years of our operations, Environment360 has tested several models for the collection of plastic. We strongly believe that the model of a take-back center is the that government of Ghana and local municipalities should wholly embrace since it shows the most potential".

"This take-back center addresses two of the main issues that informal sector workers face; transportation and storage space for the materials they have collected. By placing take back center in strategic places around the city, we believe that we can empower informal waste workers to collect more recyclable waste and thereby reduce the amount of plastic pollution that we find in our communities, gutters, and oceans", she said.

She added that Environment360 is set to open another take-back center in old Fadama at the end of November, this year.

"Fortunately, this program is subsidized by North-Rhine Westphalia and GIZ, which has led us to be able to save around GH¢20,000 so far to continue the program.

"We will continue to work diligently with private sector partners that are also committed to reducing plastic litter in Accra".

We know many packaging and bottling companies understand that they have a role to play in plastic pollution and we are hoping that they step up to the plate so that we can continue to expand the number of livelihoods that are being supported and the volumes of plastic waste collected at source from coastal and urban communities", Ms. Aziz stated.

The project was launched by Mr. Oliver Boakye technical advisor to the Minister of Environment, Science, Technology, and Innovation.