Glamour and trade at the world's biggest chocolate fair in Paris 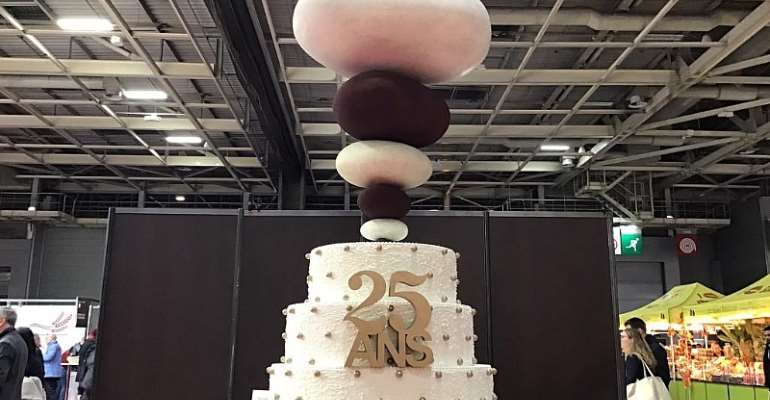 Walking into the 25th edition of the Salon du Chocolat is like a reminder of Charlie walking into Willy Wonka's factory with his Golden Ticket.

At the entrance, fountains spout creamy white and dark chocolate.

Further on, a huge chocolate rhinoceros ponders the scene alongside a majestic chocolate polar bear.

Everywhere you look, there are chocolate wonderland treasures – miniature shoes, cars and a fashion show with designer chocolate dresses.

"Nine in ten people like chocolate, and the tenth person is lying," a moderator on stage cries out.

However, beyond the hyped marketing and over the top entertainment, there's also a reality check about modern chocolate trade at the fair's international stands.

Chocolate producers and entrepreneurs from around the world have set up shop here.

Most producers are from Africa and Latin America, though Asian countries like the Philippines and Indonesia are also present.

Chocolate economics in Africa
RFI met Yaz, who represents chocolate producers from Côte d'Ivoire. Effervescent, proud of her wares, Yaz says the chocolate industry in Côte d'Ivoire is about pushing the country into the global market through a self-sufficient economic model.

"Everything you see here is produced in Côte d'Ivoire," Yaz says. "The beans, the chocolate, the cocoa butter - even the packaging is 100 percent local."

"We pay the chocolate farmers for their product, and then chemically transform the beans for the global market. We are the largest producer of cocoa in the world, and the farmers must benefit from this."

A few stands away is Komi, an entrepreneur from Togo. Displaying cocoa fruit from his country, Komi says that the chocolate trade is bringing major social change in Togo, and that Togolese are no longer mere exporters of the cocoa bean.

“My parents have been cocoa farmers in the countryside all their lives,” he says. “Only in 2013 did they taste chocolate for the first time.”

“But that is changing now. We produce our own chocolate and sell it to our people. In Europe, we sell our chocolate for more than double the price back home. This way, farmers and producers in Togo can have decent lives from their produce.”

“Chocolate is no more a luxury product in Togo,” Komi says, a twinkle in his eye.

From coca to cocoa: chocolate in post-war Colombia

Moving on, we come to a stand showcasing chocolate from Colombia. RFI spoke to Alvaro Sierra, a representative of Procolombia – a government entity promoting cocoa farming amidst Colombia's remote coca farmers.

Alvaro sees the cocoa crop as a way for Colombia to move forward after decades of civil war and cocaine trafficking. The cocoa crop, he claims, can be a means for a torn post-war society to come together. “It's very easy to say, that to stop the cocaine industry that has ravaged Colombia, one just needs to destroy the coca fields,” Alvaro explains.

He shakes his head. “It's not that simple.”
Alvaro says there are thousands of innocent people who depend on coca plantations for survival. Poor farmers working for their livelihood.

“We try to convince them to change from coca to cocoa farming. We show them that changing their crop can be productive in the long run, even if the financial benefits are less. Then we help them make the change.

“But it's a long process, and we have a long journey ahead.”

Japan: from fine to finest
Free from social problems related to cocoa plantations and export, the burgeoning Japanese chocolate industry focusses on another aspect of the brown diamond.

“We want to improve the sensation of chocolate in the world.”

So will the world take on to Japanese chocolate?
“It'll take time,” Yokoto admits. “We're just entering the market. But as people taste and discover our products, they'll see that our products are actually very high-end.”

Tasting one of Yokozo's creations, a chocolate infused with the Japanese fruit Kuzu, we can see what he means.