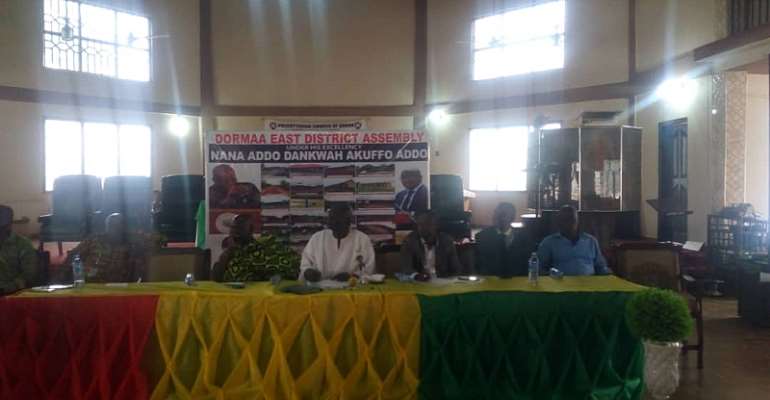 The District Chief Executive of Dormaa East, Hon. Emmanuel Kofi Agyeman has commended government for its tremendous contributions to the district; saying that the district has indeed improved in terms of developments under President Akufo-Addo's regime.

He made the commendation during the first meet the press series organized by the Assembly in collaboration with the District Information Services Department on Wednesday October 23, 2019 at Wamfie the district capital.

The programme which brought together over ten media houses from within the district and neighboring towns among other stakeholders focused mainly on developmental projects and benefits derived from the government flagship programmes.

On healthcare delivery, the DCE applauded government for the completion of community Health Centres (CHPS) at Mewerefiriwuo and Peprah Shed as well as the renovation of two others at Kyenkyeanse and Kunmajibre. He announced the stability and progress of the NHIS at district level and added that the Member of Parliament for the area, Hon. Kwesi Sabi has secured a place to be used as District NHIS office soon. He also said plans were underway to upgrade the Wamfie district hospital into a full fledge district hospital status among others.

Hon. Agyeman, again commended the government for the increase of disability fund from 2 to 3% and the presentation of start-up-kits given to persons with disability as means for bettering their source of livelihood.

In his delight, the District Chief Executive, proudly spoke of the Okuafo Pa agribusiness school (a multimillion agriculture training center which comprises an 800 capacity lecture hall, workshop centers, administration block and classrooms as well as modern storage facilities and other utilities.) at Kyeremaasu to offer training on agriculture productivity.

He enumerated the importance and benefits of the school to the people in the district. He added that a Heli park sited at Kyeremasu, Agric Mechanization centre at Wamfie and free distribution of over ten thousand improved coffee and cocoa seedlings have all come about due to government’s agriculture initiative such as planting for export and rural development. He also said the planting of food and jobs has also helped the district to gain adequate food stuffs in the market as well us employment for many.

He reiterated that the ministry of trade and industries have also given a go ahead for the start of a poultry processing plant and other factories under the one district factory initiative and very soon the district would see their works. He spoke about beneficiaries under the NABCO programme, the highly increases enrolment of second cycle institutions in the district due to the free SHS programme and other intervention such as the free BECE examination fee, reviving district tertiary scholarship scheme among many more.

Hon. Kofi Agyeman was also happy about the progress the district is making in terms of security and sanitation and asked for the support of the people in order to keep it up. He expressed hope that the district was not far from attaining a municipal status.

He thanked the people of the district for their support especially the media and the district assembly staff. He called on all to rally behind the NPP government for exploits in this country.

In an initial remarks, the Regional Information Officer, Mr Imoro Ayibani urged the media to appreciate the President for gathering courage to accenting to the information Bill for its passage. He enumerated the importance of the Bill to the media and called on them to take advantage of properly.

He further applauded the president for making the office of the Special Prosecutor an autonomous body to fight against corruption in the country. He also congratulated the Dormaa East District Chief Executive for his hard work.

The programme was used to present scholarship to 57 brilliant but needy students.

In a separate development, on the same day, 30 persons living with disability were presented with startup kits to the tune of over eight four thousand Ghana Cedis. Items presented to the disabled included Motor Tricycles, Spraying Machines, Sewing Machines, Ovens, Fridges and Stabilizers, pieces of clothes, Provisions and second hand clothing depending on the demands of the people. Others received cash for medication and educational needs. The DCE, Hon, Emmanuel Kofi Agyeman who did the first presentation advice beneficiaries to appropriate their benefits to ensure better livelihood.

In two separate short ceremonies, the second face of the Wamfie lorry station and Asuotiano Market Shed and floor concreting were awarded on contract.