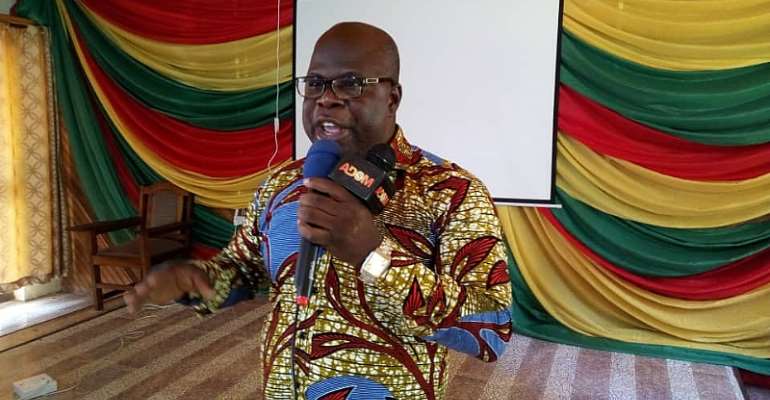 The Atebubu-Amantin municipal assembly has held a press briefing in Atebubu at which the municipal chief executive Hon Edward Owusu accounted for government’s achievements from January 2017.

Making a power point presentation, the MCE took the gathering which also included traditional authorities, heads of department and party functionaries through pictures of about 40 different projects and programmes which the assembly and central government has undertaken in the municipality.

The projects some of which were executed using internally generated funds spanned education, health, agriculture, roads, transportation, security, industry, employment and social protection among others.

On education, Hon. Edward Owusu said the government has completed and opened the New Kokrompe community senior high school started by the previous government. He said to ease congestion resulting from the implementation of the free SHS policy, government has awarded contracts for the construction of 300 bed capacity dormitories each for boys and girls at the Atebubu and New Kokrompe senior high schools adding that 150 new teachers were recruited for the district due to the double track system.

Hon. Edward Owusu indicated that 92 students in the municipality have benefitted from scholarships worth eighty-eight thousand six hundred Ghana cedis (GHC88,600.00) to enable them pursue various courses in tertiary institutions throughout the country.

On employment, the MCE said 250 NABCO trainees were recruited within the municipality with 90 having gained employment on permanent basis. He said 550 people have been employed under afforestation while 218 have been engaged under youth in sanitation adding that 250 graduates have been trained under one district one factory initiative to be supported with seed capital.

On agriculture, the MCE said due to the Planting for food and jobs initiative, the municipality is now the leading producer of maize countrywide.

Hon. Edward Owusu touched on the completion of the Kokofu CHPS compound, the creation of satellite markets and lorry parks in Atebubu, extension of electricity to Kumfia and Fakwasi, renovation and maintenance of government bungalows and the rehabilitation of a police pick up vehicle as some of the projects undertaken by the assembly.

The MCE said the Atebubu-Seneso road will be fixed by June next year while about 15 more boreholes will be provided throughout the municipality.

The Bono East regional minister and Member of Parliament for the Atebubu-Amantin constituency Hon. Kofi Amoakohene said government is considering providing interested persons with chicken for rearing in a bid to reduce the high cost of imported chicken some of which he described as substandard.

He said the Planting for Export and Rural Development initiative under which the municipality is distributing cashew seedlings to interested farmers represents wealth for the future adding that he is doing everything within his power to find a permanent solution to the water problems faced by Atebubu and its environs.

The press asked varied questions key amongst which were: cost of projects, potholes on the Ejura-Atebubu highway, retrieval of assembly funds as contained in the 2016 Auditor General’s report and the impasse between the MCE and the Amantin traditional council.

ASEPA to sue Presidency for more info on petition for CJ’s r...
43 minutes ago