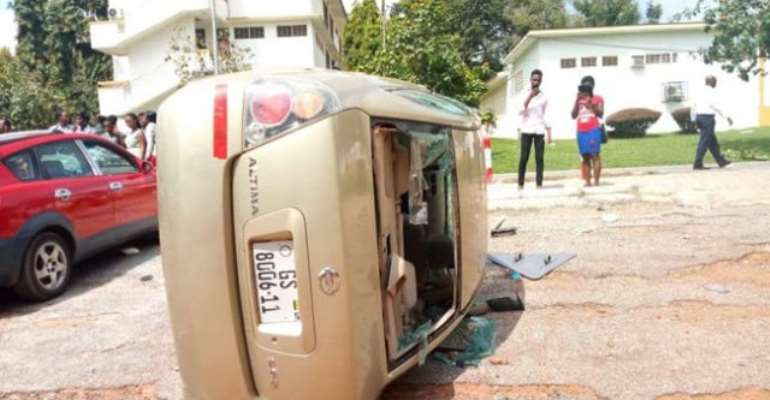 A violent student demonstration at the Kwame Nkrumah University of Science and Technology (KNUST) in October 2018, has left lecturers traumatized to date, the Chronicle newspaper has reported.

Unable to shake off that day’s disturbances, some lecturers carry guns to class.

“Do you know that after that, there are lecturers who come to the office with their weapons in their cars?” President of the local chapter of the University Teachers Association of Ghana (UTAG), Prof Charles Marfo, told Kumasi-based Pure FM.

Students discontent over what they say is an authoritarian atmosphere on campus had been growing.

At the head of this ‘autocracy’ was the Vice-Chancellor Prof. Kwasi Obiri-Danso nicknamed ‘Kumasi Adolf Hitler’. He has been accused of emboldening security guards on campus to harass and brutalize students.

And then there was the contentious issue of the conversion of a male hall of residence –University Hall – into a mixed residence.

The Hall known popularly as Katanga is seen as the bedrock of student activism. It has a pseudo-chieftaincy outfit and strong patriarchal leadership that commands respect among the students and some fear among school authorities.

They organise boisterous routine student marches and charged singing of ‘jama’ songs that is often not free from student excesses. The conversion was seen as an attempt to break the students front, a claim the university authorities have denied.

With a mixture of boiled-up student grievances, violence erupted after the students were denied a customary procession.

That October 22 2018, Monday morning protest condemned by the government led to the closure of the school, the destruction of properties valued at ¢1.6m and an intervention by the Asantehene.

The Vice-Chancellor nearly lost his job.

The media in Kumasi have been discussing the anniversary of the protests which some students say was justified. Prof. Charles Marfo called it ‘reckless’ and “needless.”

“I know a lecturer who still fears for his life. What kind of life is this? Are you saying this is what we need to celebrate?” he said.

According to Prof. Marfo, the violence that day has ‘transformed’ the attitudes of lecturers.

“If a student you are lecturing is able to set your car ablaze, the student has the capability of killing you, and so next time, if I come to lecture such a student, I don’t have to smile” he said.

Prof. Marfo confessed “confidently” to carrying a registered gun as one of the various self-protection decisions taken by lecturers who fear for their safety.

“I have to bring [the gun] along because the child I thought was a kid says he isn’t, he can set my car ablaze.”

The Professor said students need to render an unqualified apology to lecturers for the violence and hooliganism that occasioned the demonstration.

“They need to ask God for forgiveness for this” the Prof who backed the conversion of the hall said.

The Chronicle newspaper in an interview with the University Relations Officer Dr Daniel Norris Bekoe reported that the university has not sanctioned any security measure to carry guns.

Dr. Bekoe maintained campus has been calm and security there includes police officers.